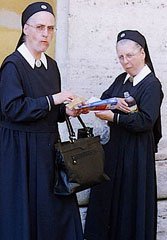 e’s tall, jovial, informative and speaks your language with ease in a country where no one else does. He’s your tour guide and your friend. Unfortunately in many cases he (or she) is also a smooth-talking money-hungry fraud. At least that’s what I’ve come to learn after working as an American in an Italian religious souvenir shop.

The shop is family-owned and operated. It’s large, with an enormous selection of crosses, statues and iconic images, as well as saints medals, gold jewelry, mosaics, T-shirts and posters. I worked in the religious section and dealt mostly in rosaries.

When I started I couldn’t have been happier. I was getting free language lessons from my Italian coworkers, earning a decent salary with the opportunity for commission on large sales, and I felt proud to work near the Vatican. As a non-Catholic I saw it as a way to learn about another religion and to better understand the Italian social fabric.

So why, you wonder, am I so hard on guides?

Each day dozens of tour leaders brought their groups to our store and allowed them anywhere from 20 to 90 minutes to shop and grab a bite to eat (the store is attached to a restaurant, as well as a tabacchaio). And shop they did.

Always on a tight schedule, tourists prize their buying time. They browse furiously, spend abundantly and leave satisfied. The tour guide usually briefed them about items in the store: Rose petal rosaries, crystal rosaries, 18-karat gold crosses and books. The guide then sat at a table, smoked a cigarette and smiled pleasantly as he watched his commissions role in.

Commissions? Yes, he has a deal with the store.

There’s more. Consider the rose-petal rosaries, which, according to the store’s most famous line, “Are made from real petals of roses. They’re not cheap made-in-Taiwan. These are made here, in the Vatican, by little nuns. They smell like roses and they won’t lose their scent.”

But tourists were undeterred. They bought two, three, even 10 at time, considering them a unique gift. (Never mind that they’re factory produced, though assembled in Italy from parts made who knows where.)

Made from rose petals? No.

Made by nuns? No again.

Won’t lose their scent? All perfume wears off eventually.

Then there was the matter of the blessing. For devout Catholics, having a purchase blessed by the Vatican and delivered to a hotel free was a treat (oh, you needed to spend a minimum of e20 and be in a hotel within 20-minutes of the store). Many paid premium prices for the blessing. Those worried about the pope being away were told, “We never guarantee the pope. It will be blessed by a priest or cardinal.” The truth was that the purchase bypassed the Vatican and went straight to the hotel.

Terrible, yes, but isn’t religion all about faith? Perhaps believing the items were blessed is enough. Maybe that’s what owners told themselves to sleep at night.

Though some customers complained loudly about price-to-quality issues, it didn’t stop euro bills from flying. Our least expensive small plastic rosary runs a whopping e10 (I’ve seen them at other stores for e2) and the smallest wall crucifix ran a minimum of e8. As for the “cheap” saint’s medals, in my store they cost e5 euro each (two for e8). Move away from the Vatican and same medals run 30 cents.

If a tourist spent e300 in the store they were eligible for a tax refund at the airport (naturally, a 16 percent tax is worked in). In June, I didn’t go a single day, not one, without serving at least one over-e300 spender. Many stores require only e150 in purchases to get the tax refund. Our store, however, decided to set its own minimum (the owners said there was too much paperwork to do it for less.)

While the store has an A-list celebrity clientele (including Julia Roberts, Sylvester Stallone, and Jon Bon Jovi), the average patron is well, just that, average. Tourists arrived in our store in droves, dropped off by their ever-informative, ever-friendly guide, someone they trusted and probably tipped. Too often, it’s a wasted trust. If I’ve learned nothing else as an American working oversees it’s how to be a more informed tourist, and get the truth out to those who aren’t, or aren’t yet.

The author sold rosaries and religious items in Rome for nearly a year. She has since returned to the United States.

About the Author: Abby Cope

Photographer Abby Cope spent a year in Rome through September 2004.