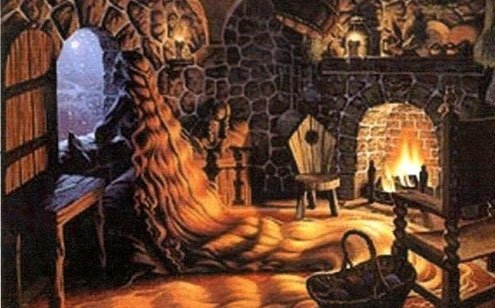 his holiday season, I want to touch on a topic that is so important to us all. Hair. The kind that grows (or doesn’t) on your head. Everyone wants to look good for the festivities and I’m no different.

Back-story: I was bald until I was seven. Go ahead. Laugh. It’s funny. More so if you are not me (but I am). Adding insult to injury when I was 10 (and had grown a head of hair), my mother took me to the local Hair Cuttery where an acid-tripping cosmetologist accidentally cut the right side of my hair twice and left the left side untouched. This was way before the asymmetrical bob was hot.

My mother had four girls getting their locks trimmed. Money was tight then, so she didn’t spring for a blow dry. When I complained, she shushed me and said, “Get in the car. You have to see it dry. Roll down the windows. By the time we get home, you’ll love it…” And she turned to continue gabbing to a neighbor. When we did get home, she turned the car around so she could raise hell and get her 10 bucks back

My hair grows painfully slowly so it took two-and-half years to recover from that bad cut. From that moment on, I took impeccable care of my hair, always paying a premium. Until I became a mother. Then my hair became less important… and more unmanageable. Two babies and more than two years of nursing turned my longish wavy locks into a kinky mess of copper looking cotton candy. My hair had been destroyed. It looked so bad that I probably could have been picked for some TV makeover show. I couldn’t believe that I had become the stereotypical mother who had let herself go. I thought I was way too vain for that. I thought wrong.

To mask the matted mess on my head this past year, I chose to pull my hair straight back in a tight low bun — or chignon for the French-friendly. It’s a great classic look if you have… well, great classic looks. If you’re a woman who hasn’t slept more than two hours at a time for four years and who doesn’t have flawless bone structure, this might not be the best look for you. And it wasn’t for me.

So this week, I did what the pre-mommy me always did: I shelled out mad cash for a top salon where a real stylist could give it to me straight (or curly) and fix this entity I used to call my hair. I made the appointment after passing by and judging the style of the staff (I am mean-looking). I liked what I saw, so I proceeded with caution.

I arrived completely tense. Hoping my teething toddler was sleeping for the sitter and praying that my colorist-to-be was a homosexual. I have trusted many a gay man with scissors through the years — except of course for that smarmy queen Didier in Venice Beach. He wanted everyone to think he was from Paris when he was clearly French Canadian.

After meeting the new man, I still wasn’t sure of his sexual orientation (Italian men throw me off; there’s something subtly feminine about them. In fact, I refer to my husband Marco as “halfway-to-homo”). But I adored what he had to say and trusted him with a new hue for my hair. And I was right to do so. The color was perfect. When it came time to chop away at the mess, I came face-to-face with a scissor wielding heterosexual man. Yikes. But then my lovely color guy came over and instructed him on what had to be done. It was a serious operation and the only thing they could both say to me was, “You’re going to need to be patient.” They had no idea just how correct they were. I was the living, breathing embodiment of the Anti-Rapunzel.

The cutting complete, my two new guys sent me packing with products and strict instructions not to use hairdryers or products that emit heat of any kind. I was to wear my new short “do” au naturale. Read: kinky curly. I was out several hundred euros and looked like a female butch version of Ronald McDonald.

This is the price I paid for letting my vanity maintenance lap. So mothers everywhere, I implore you: Don’t let this happen to you. Take good care of yourselves inside and out — get that pedicure, go to that spa, see that shrink. You’ve earned the pampering

Here’s wishing your holidays are filled with superficial beauty and inner peace.