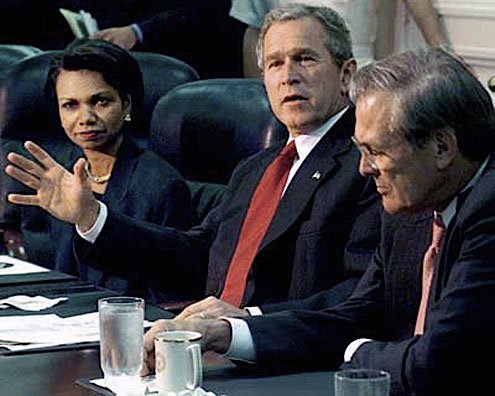 “In telling lies while sounding sincere, in being ignorant and astute, generous and thieving, idiotic and clear-headed,” writes Zucconi, “[Bush] is the perfect incarnation of an America that leaves it to us … to decide who and what we like best: John Wayne or Woody Allen, Noam Chomsky or Donald Rumsfeld, urban rap or honeyed-down country and western.”

While much of Zucconi’s bluster can be excused to leftist hyperbole, it also reflects Europe’s enduring love-hate relationship with the office of the presidency and with America itself. Bush, who faces re-election in November, finds himself at the tumultuous center of a global debate concerning the role of the United States in a troubled world order.

But what does Italy really think of the U.S. president, who is already trading blows with his likely adversary, Democrat John Kerry? How does Italy, a nation of inveterate talkers, gifted debaters and glib but sometimes ill-informed intellectuals, view a blunt leader who has many times said he cares little how Europe regards him, so long as it supports his policies — which Italy does officially? How have interpretations of Bush evolved since the spellbindingly awful events of Sept. 11, 2001, which set in motion the most aggressive foreign policy in U.S. history?

Despite a recent groundswell of opposition to the U.S. role in Iraq, nterviews throughout Italy suggest a complex, critically ambiguous view of Bush and his administration. The March 11 terrorist attacks in Madrid that killed 191 people, as well as recent unrest in Iraq, appear to have either solidified support of Bush’s hard-line policies or irrevocably undermined them. Few are neutral in the Bush debate, which cuts across social and economic lines.

Take Claudia Macri, a 38-year-old Rome police officer. For Macri, Bush is “an intelligent and important man, as well as a strong leader. I hate what Al Qaeda is doing throughout the world. We cannot remain apathetic to murderers.”

Italian policy has not been apathetic. Prime Minister Silvio Berlusconi is among Bush’s staunchest allies — he was invited to Bush’s Texas ranch last summer — and has defended the American neoconservative notion of “pre-emptive” wars to undercut terrorist threats. When Spain announced its decision to withdraw its troops from Iraq, Berlusconi immediately reiterated his backing for Bush.

Meanwhile, the Italian center-left, while assailing Bush in the same vein as Zucconi, has found it difficult to convincingly denounce U.S. policies since a suicide attack in Iraq last fall killed 18 Italians; there are 3,000 Italian troops in Iraq. More recently, Iraqi insurgents killed an Italian hostage.

In fact, the troubles intrinsic to the post-Sept. 11 world have moved many Italians to shift their allegiances. “In 2000, I supported Al Gore, but I ‘accepted’ Bush as president after 9/11,” said Dimitri Buffa, a 44-year-old freelance journalist who lives in Rome. “His mandate began when Al Qaeda not only attacked the United States but started what I see as a third world war … I maintain [Bush’s] ‘us’ versus ‘them’ stance.”

Another journalist, Arturo Diaconale, who is editor of the daily L’Opinione, repeats the view that the struggle against Islamic terrorism is tantamount to “World War III.” For Diaconale, Bush has been decisive and powerful in the face of the draconian terrorist menace. “We as Europeans can not do anything better than to maintain him and his administration for another four years.”

Europe, and Italy within it, has lurched for decades between two philosophies toward the United States. The first one is largely deferential, based on America’s wartime feats and its largesse in assisting the continent in the 1940s and 1950s, when it pumped in millions of dollars in aid, helping reconstruct famished nations and building a political front against the communist threat. The second is far more skeptical, built on classic leftist opposition to what is perceived as America’s self-righteous view of its international pre-eminence.

The latter view has been given new life by Bush’s conviction that principles of U.S. democracy must be exported to other nations to save them from their baser side, as well as to protect the United States from “evil-doers” who run amok in the non-American world. Anything else, Washington suggests, is tantamount to new-age appeasement. Zucconi mocks Bush’s “intense dialogues with God,” while another, more elegant detractor, Giorgio Bocca, describes modern America democracy “as similar to that of the Roman Empire, governed by an oligarchy that controls an entire financial, economic and media system.” Bush, he writes in “Basso Impero” (Low Empire), represents “the patriotism of the privileged.”

During an anti-war demonstration in Rome in March, demonstrators reflected this view and gave it a typically self-deprecating Italian twist.

“The difference between Bush and Berlusconi is only that Bush can do a lot more damage to the world,” said Roberto Pesarini, a 28-year-old administrator at Rome’s La Sapienza University. “Berlusconi is limited to just us Italians, shall we say. The president of the United States has responsibility that goes far beyond his country.”

“I have the impression that since Bush has been in power the world has become a riskier, more dangerous place,” he said.

It is in this vague sense of helplessness, with its daily seepage of anxiety, that the connection between Bush and Berlusconi becomes more apparent. Those who dislike Berlusconi, accusing him of self-interest and manipulating his billionaire status, sense in Bush a president who stage-manages the power of an ultra-rich, omnipotent hyper-power. And they wonder to what extent Americans comprehend the world around them.

“What we Europeans don’t understand is how little the American citizen knows, and if they are interested in what America does outside, in the world,” said Gianpaola Castelli, a Rome tour guide.

“Bush is of the powerful, interested only in the powerful,” added Fulvia Serra, 63, a professor of journalism in Milan. “He has the terrible behavior of a person convinced he is right and therefore has every right to impose his will on others, no matter what they think or feel. This is awful, and very un-American.”

“Bush is an exceptional case of the negative stereotypes that go along with anti-Americanism: the son of a past president, not very cultured, never been to Europe before, not very open and a little provincial, thinking only about profit and materialism,” observes Paola Castelluci, a professor of information sciences at La Sapienza. “These stereotypes have been used by both left and right in Italy, and Bush seems almost like a caricature of them.”

And yet the caricature has its fans, who sense necessary strength in Bush’s stubborn, unwavering leadership during crisis.

“His last four years in office have been some of the hardest in the history of the United States. And even though I don’t agree with everything he’s done, I think he’s handled emergency situations well,” said Marco Clementi, a television broadcaster for Catholic Telepace who recently moved to Rome from Milan.

Some Bush supporters, however, say they have become disillusioned since the war in Iraq, whose outcome is now unclear. Eighteen months after the invasion, many have come to believe what they first dismissed, that the attack on Iraq was a pretext for control of that country’s oil reserves and the culmination of a Washington inner circle vendetta against dictator Saddam Hussein, now in U.S. custody. Those uncomfortable with Bush’s stand on Iraq also cite American global arrogance and the president’s shortcomings in ensuring civil liberties, two benchmark themes that have helped unify Italy’s anti-Bush opposition.

“I thought that the Americans wanted to bring democracy to Iraq and to liberate it. But underneath, they wanted power, and control of oil, and ultimately money,” said Lorenzo Nocentini, a Rome ophthalmologist. Iraq, he warns, “could be another Vietnam.”

Brunella Greco, a 27-year-old researcher with Parsec, a Rome-based social research institute, is far more categorical. “I believe that [Iraq] is his personal war, not America’s war. He subverted international law, the United Nations and public opinion.

Greco also raises another interesting point: the war on terrorism, and Bush’s unilateral policies, have fostered a sense of impotence among non-Americans. What worries her most, she says, “is that my opinion does not matter in the least. I am more worried about this than a bomb dropping on me.”

Defense Secretary Donald Rumsfeld, a key member of Bush’s inner sanctum and a longtime hard-liner, hardly helped matters when he dismissed anti-war criticism from France and Germany as belonging to “old Europe.” Berlusconi’s Italy was never the object of such disparaging remarks, but they were felt here nonetheless — and the failure of the United States to bring order and international consensus to Iraq has only emboldened Bush doubters.

“He [Bush] is not clever enough to make his own decisions,” La Sapienza’s Pesarini said. “He’s just the representative of the powerful group that decided to put him there.”

Yet it is students who, typically, are the bellwethers of deeper, more passionate outrage. “He’s a murderer, isn’t he,” said Sara Giacomelli, an art history student in Florence, at the March anti-war demonstration. “The war seems completely pointless and unfair.”

And to many the war’s mounting pitfalls are a harbinger of tougher times ahead.

“Bush is very influenced by a lobby that believes the use of force is the only way,” said Francesco Gui, who teaches European history at La Sapienza. “This is a dangerous and fanatic component that feeds into the battle between civilizations. I fear the worst.”

Gui’s concern, and that of many academics, is that Bush, despite his evident personal and religious convictions, is a pawn for ideologues. “What needs to be created is a solid relationship between the EU and the United States that avoids splitting European countries,” Gui said. “Bush may be capable of creating this, but what worries me are his advisers who think that war is the only answer … and follow a political style of power that was used in 17th- and 18th-century Europe.”

Italians seem to recognize some of their continent’s own shortcomings in the American president’s relentless approach — perceiving the perils of a return to a state of medieval holy war.

Rolando Magnano, a 31-year-old at the Rome Psychoanalytical Institute for Social Research, thinks

Bush fell into a trap when he attacked Iraq.

“Not knowing how to fight it [terrorism], the reaction has been to attack single states, a mistake,” he said. “This has worsened the situation. We are following a tragic road that will end up creating extreme conditions of conflict, not just for Western countries.”

Essayist Bocca, writing in “Basso Impero,” is suggestively dire. “For many Europeans,” he writes, “Bush’s America ends a great illusion: that the era of reason was finally upon us.”

Sounding like Dwight Eisenhower, a Republican president who in the Cold War 1950s warned of the rise of a “military-industrial complex,” Bocca evokes a Bush-led “economic and military oligarchy ever more distant from citizens.”

All this rhetoric does not alter a central fact: there is no Bush consensus. Emotionalism prevails, some freighted with fear, some with dogmatic prejudice. There is, at least, an occasional outburst of black humor, Italian-style.

Turin consultant Marco Rossi, asked what kind of meal he’d make if Bush dropped in for dinner, couldn’t resist the lure of current events. “A Middle Eastern dish,” said Rossi, “maybe something from Kuwait. Falafel maybe. Something delicious — and Arab.”