Bush at War; Plan of Attack 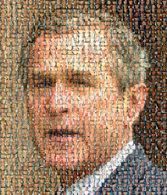 History is an embarrassing mistress. It can make you look like a shill. These early installments into the war literature of George W. Bush are “instant” enough to make Woodward’s reputation suffer the whiplash of his own hindsight (see “State of Denial”). Between late 2001 and 2004, realism was patriotic, which is to say it went dark. As a diary of White House gossip, “Bush at War” is rousing. Bush to mates on Air Force One immediately after 9/11: “We’re going to take care of this. And when we found out who did this, they’re not going to like me as president. Somebody is going to pay.”

Woodward sorts through the many Afghan options and finds one that recommends poisoning Afghanistan’s food supply. It was rejected. Comments from Vice President Dick Chaney (a sub-president in terms of impact), Defense Secretary Donald Rumsfeld, National Security Advisor Condoleeza Rice, CIA Director George Tenet suggest men and women acting on a brimstone weather forecast rather than looking at the skies. Time and again in 2002, Bush reminds aides “we are under attack” and “we are going to win,” his sense of anointment growing. Cheney quarrels with Secretary of State Colin Powell, who grouses but does little more. There’s Bush’s revealing comment: “I’m not a textbook player, I’m a gut player,” which Cheney (“hell-bent on invading Iraq”) seemed best-equipped to understand, giving “action man” Bush a framework.

“Plan of Attack,” the Iraq volume, deals more comprehensively with Powell’s timid doubts and the gradual discrediting of the CIA’s “slam dunk” view of Saddam Hussein’s WMD capabilities. Revealingly, it notes a Special Forces incursion into Kurdish Iraq with $32 million in cash for payoffs — based on the ongoing belief that cash might buy loyalty and quash eventual insurgency. At one point, Woodward refers to the zeal of Cheney’s anti-al Qaeda, anti-Saddam fervor (in Karl Rove’s words) as “a real fever,” and that’s what these books tell of: a high-grade fever, passed from one White House figure to another and back again, nourishing a frenzy independent from the projects it helped generate.