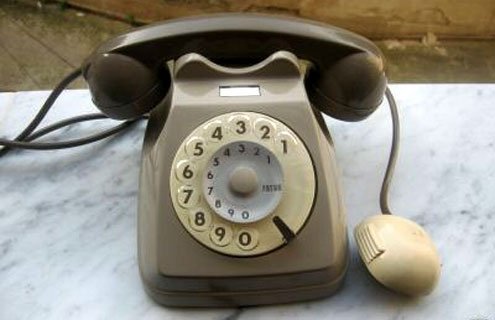 he problem, explained the friend of my mother’s friend, was a burned wire, a short circuit. Fili bruciati. To my neophyte Italian ears this sounded like a case of burned sons.

Look at it! See how it sits under the gutter and curls!?

We were on the terrace. I saw nothing but nodded.

They probably stuck it under the roof tiling, those bastards!

The phone had gone dead.

My mother had called the phone company, but weeks had passed. Finally, she’d begged her friend Mr. Leo for help, and he called Professor Da Vinci.

Professor Da Vinci knows all about wires and pipes, Mr. Leo assured my mother. Let him have a look.

Da Vinci came on a Sunday. A tall man, he wore a scruffy grey jacket on which he tugged awkwardly. He removed the jacket, which was draped over a dapper but informal shirt. He had come to work.

My mother greeted him. Pleasure, he said. I am Da Vinci. Mr. Leo told me about the phone connection. He spoke in small bursts.

My mother apologized to Da Vinci. It was Sunday. He’d come so far. It wasn’t his usual work.

Don’t worry, said Da Vinci, this is Italy. We all need to know a little of something.

Professor Da Vinci was a cosmologist at the Rome astronomical observatory at Monte Mario. Mr. Leo had met him at a planetary research conference in Milan. They shared stories about contiguous orbits and red wine.

I know a little about everything, said Da Vinci. May I borrow your son?

My mother agreed, and I become Da Vinci’s helper. First, he traced the source of the phone line, which he decided must enter the building through some kind of hole in roof.

In Italy, we must be inventive to survive, he told me. Then, Where are the water towers?

I pointed to the staircase. Up we went into attic boondocks of gargling pipes. Disturbed pigeons scattered wildly. They’d nested beside the many tin barrels of water, oddly called cassettoni, or chests.

There! he exclaimed. See the wire? I did. It snuck in under a roof tile, wrapped around a grated portal, and snaked teasingly along the base of a large water tank before disappearing again into the wall.

We spent three hours following the droopy beige wire, from pigeon attic to the terrace, from terrace to a translucent glass awning that lunged from the roof over the garlicky courtyard. We were now four floors up, like trapeze artists, scouting the roof around wind-bent television antennas. There, by a few old bricks, was a rusty box.

Da Vinci was thrilled. Now, give me a minute, and he pried open the rusted box. Inside was a darkened wire. See! See! This is the phone coil. A short. I told you. I will get a tool and strip the wire.

He did, insisting I stay behind so he’d remember his path. Fifteen minutes later the phone signal was restored. My mother plowed Professor Da Vinci with thanks, to which he just nodded, putting the jacket back on.

Madame, he said, Doctor Leo is my friend, and thus I am yours.

Then he turned to me. You have had an Italian day, he said. We often have to make it up. People say we’re disorganized, and this is true. But, you see, we know how to do things. In America, you call someone to fix something and the repairman comes. Here, most of us learned handy work.

I again nodded vigorously, mostly on my mother’s behalf. As an American trained in customer service and planned obsolescence, Da Vinci seemed to me a little crazy. An astronomer had come to our apartment on a Sunday and spent three hours to get to burned sons amid portals and pigeons.

On Friday, my washing machine broke. Manufactured in 1987, installed in 1989, the year after my mother’s death, it had worked reliably for two decades. But now it was broken. The water wouldn’t drain. I spoke to a Yellow Pages technician who scoffed when I mentioned the machine’s make and age. No longer manufactured, he told me.

I then called Mr. Leo’s son, who since became an acquaintance. His father died a decade ago.

He listened to my drain-cycle tribulations.

Washing machine? Mechanical? Okay, yes, listen, do you remember the astronomer Professor Da Vinci, my father’s friend from a long time ago? I did.

The next afternoon, Marcello Da Vinci, certified public accountant, the astronomer’s son, showed up. In two hours he dismantled and repaired the veteran machine.

In Italy, he told me after, we have to know a little of everything. My late father taught me that.

I know, I told him, warmly shaking his hand. His father who once came on a Sunday to deliver my mother from burned sons.