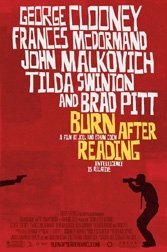 It figures the Coen Brothers would follow pitch-black “No Country for Old Men” with comic relief. Here’s a slight but cheerfully twisted comedy about the penalties of bad intelligence and gross vanity. Bad news: It doesn’t quite work. Good news: These guys don’t make bad movies.

Mix and match the above, include greed, divorce and dissension and you get idiocy and confusion, in that order. The men are weak, the women are driven, everyone’s sleeping with everyone else, and the CIA doesn’t have a clue. The movie’s zany central characters — particularly OTT Malkovich, Pitt and McDormand — are hilarious (Pitt and “What the fuck?!” Malkovich have a field day). The rest is a nasty little screwball satire about paranoid Washingtonians who are paid to know everything but are professionally clueless.