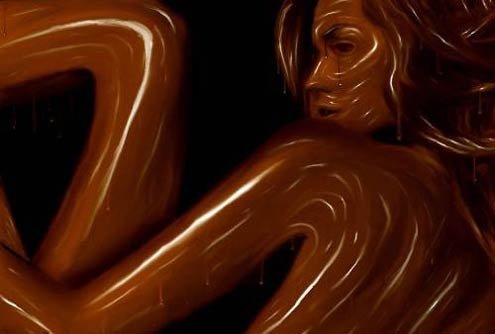 They are completely edible.
T

hrough the special peephole he had installed, the Chef saw the young, cinnamon-haired critic approaching his hidden restaurant. She looked… what? Apprehensive, hesitant, excited? Well, he could handle that easily, and she was ripe for the plucking, a healthy sheen to the skin, like a perfect summer grape. He moved back into the kitchen, leaving the exquisite door, carved with Bacchanalian themes, slightly open, inviting.

She in turn had heard stories about this new chef, the rage of Europe, Asia, the U.S. and several small atolls in the South Pacific. She knew he had strange tastes along with his golden palate. But she was ready for him.

She knocked, waited, then entered a seductively silent room, the tall windows hung with eggplant velvet drapes, the parquet floor warm as fresh honey, the discreetly placed tables set with gleaming flatware, the sterling handles of which represented positions of the Kama Sutra. A lush, creamy light softened the room, which smelled of good wine, orange blossoms, fresh bread — sensual, heady smells that pulled her slowly into the kitchen. And there he was, a glistening kielbasa in his hand, which he stroked as if to plump up its savory juices.

A long worktable of Carrara marble took up one end of the gleaming stainless steel kitchen, and on the table, the length of a person, he had just laid a soft, golden layer of gateau Genoise (buttery with cream from organically massaged cows and speckled Rhode Island Red free-range eggs).

“I didn’t expect someone so…appetizing,” said the Chef in his famous, thrilling chocolate marquise-napped-with-crême anglaise voice. “Come over here,” he said, touching her arm with one fingertip, redolent of extra-virgin-cold-pressed Tuscan olive oil. “Let me start you off with three Olympia oysters, jewels from the west coast of America where they almost died out several decades ago.” She inclined her head, showing a slender neck white as fresh mozzarella, and let the tiny oyster slip down her throat. “Ah,” the Chef said, “someone who knows how to enjoy the simple, horrendously expensive things in life; we swim in the same sea, it appears. One might call us ‘sole mates’,” he continued, chuckling at his own foolishness.

He led her around his perfectly coordinated minimalist Stark kitchen, gently but firmly taking her wrist to guide one of her fingers (no polish; she knew her chefs) into a cold, stainless steel bowl of passion fruit mousse that would be folded into a batter for tiny macaroons, which, when bitten would leave nothing but a memory of fruity perfume on the tongue.

They returned to the marble slab, where the Chef suggested that one should feel the food one eats, caress it, love it, inhale it, absorb it, let it swirl through the senses like a drug, and, casually, he suggested, “Why not slither up on the genoise, as if resting on a cloud of spun sugar, or a magic carpet of marshmallow cream?”

“You mean actually lie on the cake?” Her eyes widened like crepe batter spreading over the hot griddle.

“Why not?” he responded casually. “One puts cucumbers on one’s eyes, massages mayonnaise into one’s hair. It’s nothing but pure pleasure to lie down on a cake!”

“Well… it would be a new sensation, wild and crazy; no one will believe me, but…”

A child of parents from The Age of Aquarius and Woodstock, she shyly took off her simple summer shift, and settled softly on the inviting cake.

“Wow, what a trip!” she breathed, breathily. “Ecstasy is nothing compared to this!”

“Now close your eyes to fully experience the texture, the crumb, the essence of this masterpiece,” he said, as he quickly bound her wrists and ankles to the hidden kitchen towel hooks built into the sides of the table with al dente De Cecco spaghetti.

“Why, Chef, Chef, what on earth…?” She felt a warm, unctuous, tantalizing liquid being slowly poured over her body, filling the intimate crevasses and titillating her most sensitive parts. The intoxicating, lush smell of 85 percent Valrhona bitter chocolate filled her nostrils, and she opened her eyes slowly to watch as the Chef languidly massaged his special 85-year-old-Baron G. Legrand-Armagnac-scented ganache between each seashell toe (recently polished, just by luck, with Raucous Raspberry Red).

He lovingly licked the sweet sculpture of her chocolate-covered body, drinking her in as he would warm cocoa on a chilly night, murmuring apologies for ruining her delicate gossamer tanga panties.

“Don’t worry,” she said with a delicious gleam in her eye like the silver bee-bees sprinkled on sugar cookies, and with the certainty that her review would surely take the cake, she whispered, “they are completely edible.”