Bumps in the dream 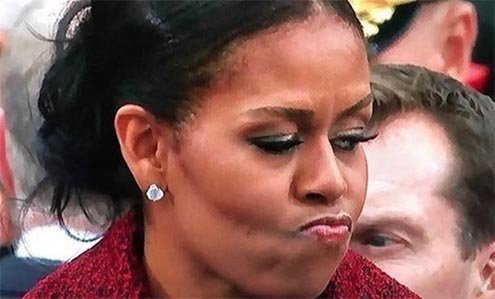 Something about Michelle Obama's face at the Trump inauguration spoke at least a thousand words.
W

henever I sit down to write when I’m on the road it’s usually in a hotel reading room with just the right amount of ambient music. Not today. Today is the inauguration of Donald J. Trump and it’s not something I want to miss. But the ambient music won’t go away. It’s Sting. He’s singing.

The new president of the United States takes the oath of office with his hand on the Bible. He stands beside his Slovenian-born wife Melania, who is decked out Jackie Kennedy-style in Ralph Lauren. They look like a distillation of the brand name culture around us, a little withered, a little sad. Behind Trump is a dignified looking Barack Obama. Michelle Obama makes no effort to conceal her feelings. She looks at Trunp warily.

I recently stayed at a Rome so-called boutique hotel called Franklin Feel The Sound, which bewitched me. It’s near the Vatican and the entrance is through an anonymous looking door. Inside, everything changes. The mood is youthful, fresh, cheerful, with the rooms furnished in musical motifs. My bed was shaped like piano keyboard. The bedside table was a riff on a drum set. The bathroom lights took a cue from strobes. Nothing kitschy about it. On the countrary, it was all very discreet and welcoming.

My ground floor room also had its own personal outdoor veranda. The morning after my arrival, it was the veranda that revived my love for the city, a sense of affection that’s taken a beating in this time of earthquakes.

I opened the balcony doors to let in some fresh air in, but just I pulled away, I was startled by a voice. It was Eddie Vedder singing “Guaranteed” through the veranda sound system. I drew an involuntary sight of relief.

The song is part of the soundtrack of the movie “Into the Wild,” the true story of Christopher McCandless, a middle class honors graduate who decided to tear up his credit cards and ID and head for the Alaskan wilderness. He wanted to get to the meaning of life and decided total isolation was a way to get there.

That night, I supposed to meet Giorgio after a month of not seeing him. There’s a popular TV jingle that goes, “Isn’t pleasure itself the act of waiting for it?” I joked about the wording with Giorgio and we jointly decided the jingle was a lie.

The next day I had a morning date with two of my oldest high school friends, Valentina and Anna. I couldn’t wait to see Valentina. I couldn’t say the same for Anna.

Anna represented my worst disappointment in terms of friendship. She was the first person I met in high school, and the last person I ever imagined leaving. She was the mirror image of the person I thought I was. She was also a confidant, a friend, almost a sister.

But one day her not-so-princely Prince Charming turned up on his white horse. Not literally but close. Predictably, he started taking up 80 percent of her days and nearly all conversation.

But that’s not what made our friendship come apart. It collapsed when she deliberately chose to ignore my worries about her prince, a man who ended up turning her life upside down for the worse. Anna even put her life on the line, and I have no idea if she still suffers from the eating disorders that plagued her all those years ago.

When the relationship ended she came back to me with her tail between her legs. But I had nothing left to tell her, except maybe to stay away. I’d dedicated years of precious time to her. Time she used and tossed like a dish rag I was proud enough to tell her we couldn’t just revive the friendship as if nothing happened.

I met them both at a popular Rome pastry shop.

There was Valentina, with her jet black eyes and hair, standing out from the crowd as she always had. Anna remained her tall, thin self. But aside from greetings and small-talk, she didn’t say a word that morning.

We chatted amiably about old times, laughing while sipping prosecco and munching on nuts. I enjoyed it at one level, but on another I wanted it all to end.

There are parts of us that die over time and sometimes we don’t even know it.

The old me, the one that laughed and made conversation with Valentina and Anna, disappeared the day I graduated from high school. There was nothing to get back.

Back at the hotel, I thought again about Trump.

At the beginning of this musing, I left you with an “and yet…”

And yet there’s America, a country capable of making a movie out of anything. America the exaggerated, America the incredibly vast, America with the eyes of child that still knows how to dream

And yet this same American has handed itself over to a man who knows how to manipulate dreams. It has delivered the dream to a man who is what he is today thanks only to the money he’s made along the way.

Yet my own dream endures, and I hope it doesn’t turn into regret. My father got just one thing from America, a moral souvenir of sorts: the conviction that if you want something your have to go out and get it.

Though a part of me, the high school graduation part of me, may be gone forever, I still hold hands with a little blonde girl who smiled a lot and dreamed of America.

And Trump notwithstanding, she’ll get it. And Sting sings: