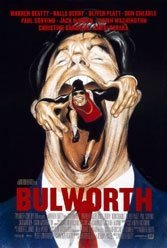 Sex symbol, lady-killer, suave American icon: One size fits all for Warren Beatty. But this fierce bit of satirical lunacy (which he wrote and directed) just lets Beatty be Beatty and the result is a luminous sliver of Americana.

Senator Jay Billington Bulworth is a California Democrat who’s tired of the charade. He’s so “platituded” out he puts a contract out on himself. His own end in sight, he can cut the hackneyed crap. Bull ends, replaced by rapper Bulworth begins. The expiated Bulworth begins peddling gansta liberal schtick in lyrics (it helps that he’s fallen for Nina, Halle Berry). “Everybody just gotta keep fuckin’ everybody til they’re all the same color.” Suddenly, Bulworth doesn’t want to die.

Coherence isn’t a cog in this wheel. Instead, you get a passionately self-indulgent screed about getting people’s attention (with Beatty channeling his inner Melvin van Peebles). Jargon isn’t a way to the point, it is point. “White people, black people, brown people, yellow people, get rid of ’em all/ All we need is a voluntary, free spirited, open-ended program of procreative racial deconstruction…”

Not gonna happen, but Bulworth Beatty — plowing Redford-tilled land (“The Candidate”) — gets his money’s worth, and so do you.