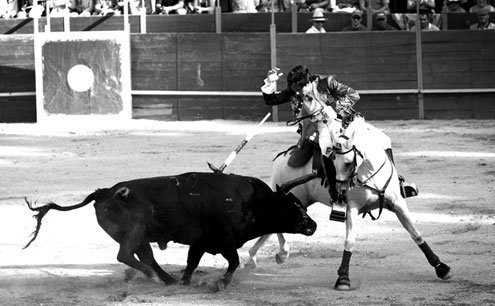 In Portuguese-style bullfighting, it's the Cavaleiro, the man on horseback, who does most of the dueling.
H

is pelvis thrust forward in his seat, following the direction of his dark brown eyes. His mouth, cruel, opened slightly as his chin dropped towards his narrow chest, which appeared to cave oddly inward, the opposite of puffing, in anticipation. As he raised his wrist, which nimbly held his weapon, I saw his thigh muscles tighten ever so slightly. Not once did he flinch. Nor did I.

He was on the most potent drug known to man: power — which on the male-driven Iberian Peninsula is machismo.

I held my breath awaiting his next move. My eyes remained fixed as his fingers toyed gently with his weapon. Did he just smile?

The crowd cheered louder. He was teasing them and they wanted blood, blood he would give them — but only when he felt like it. The more their cheers begged him to continue, the longer he made them wait. Another smirk.

The air was dense with cigarette and cigar smoke. Antonio, who had brought me to the bullfight, turned to me, cocked his head and chuckled.

“Jennifer, you look so out of place.”

With the whites of my eyes now entirely red, I broke my stare, rubbed them, and looked at the crowd around me. Antonio was right. It was as if I had been abducted by a UFO and dropped, in a confused state, on a planet I didn’t know existed. Only the planet was the size of a small stadium in Lisbon.

Looking at the bull, it seemed as bewildered as I was. The matador approached it, while the Cavaleiro readied his horse. Still confused, the bull charged the bright pink cape, almost as if to say, “Get away, I’m trying to figure out what’s happening.” Again the crowd roared. The bull, its horns severed, looked around the stadium, probably wondering when the Mothership would return and carry it back to the farm from whence it came. I also looked for the Mothership. But it never came.

The Cavaleiro charged the bull, and in what seemed like a defensive play, it charged back, only to stumble and collapse in the thick, soft sand. The young and fast horse, trained on this very sand, waited patiently, its horseman in charge from atop. The bull struggled to rise. Its body was bigger than its short legs could manage. For a moment it looked like an overturned bug that can’t right itself. I looked away out of respect until it rose.

The crowd gasped and then screamed — some in delight, some disapproving of the bull’s breeders. It seems the dissatisfied wanted an angrier animal.

The bull again looked to the crowd as the Cavaleiro continued his taunts, driving his horse forward. This time the bull charged closer to the horse’s hind legs. What followed seemed like short dance routine played out by the Cavaleiro and horse — much like an aristocratic dressage show (unlike Spanish bullfighting, the Portuguese variety centers on the horseman).

Then came another smirk, at the crowd, and a scowl, at the bull. The Cavaleiro charged and stabbed a bandarilha (much like a small spear) into the soft spot in the bull’s shoulder blade that leads to the heart. Dark blood seeped from the wound onto the bull’s black coat. The bull paused again, confused. Red drops began falling to the sand below it.

The crowd exploded. Now the Cavaleiro held his arms aloft, finally puffing out his chest, even beating it once, like a great ape.

A servant readied another bandarilha for the Cavaleiro while the matadors, at the ready, hopped the short wooden fence. Calling out to the bull, waving their bright pink capes they, too, taunted the animal mercilessly. This gave the Cavaleiro space for the charge. As if they needed it. In truth the horse could’ve jumped right over the short-legged fat bull without a problem.

But that wouldn’t make for a good show.

I watched the torture of three more bulls before we left. Only one fended off death and was rewarded with a return to the farm. The others, like the first, weren’t quite mean enough to warrant living. I didn’t want to think about what was happening to the carcasses behind closed doors.

As we left the arena, we passed the protesters, who’d been there when we came. They were corralled behind a fence, like the bulls. Was it to make a statement? At a recent demonstration, some protestors said bullfighting defenders threw water and bleach at their faces.

As an animal lover, I felt guilty for having attended the “event.” I placated myself with the notion that I’d gone to write an article on bullfighting culture. But I still felt dirty. Not because I’d enjoyed watching the torture, I hadn’t, but that by attending I’d indirectly condoned the show. Yet it’s a very old show — as old as literature, in fact.

There’s a long passage from an epic poem that details a bullfight and describes a matador “dancing in front of the bull” luring it with “tunic and bright weapons.” The language contains all the fascinated and morbid curiosity I felt in Lisbon. Except that “The Epic of Gilgamesh” was written in the Sumerian language 4,000 years ago.