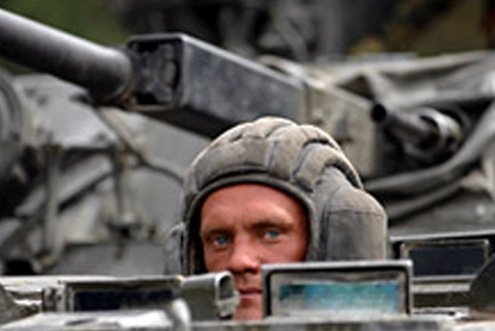 here’s a pop theory making the rounds in the wake of Russia’s invasion of Georgia and China’s opulent hosting of the Summer Olympics. It repudiates Francis Fukuyama’s now 20-year-old assertion that the collapse of Soviet communism marked the “end of history” and implies that 20th-century autocracies are inexorably bullying their way back to the forefront. Whether in Georgia or in the streets outside the Beijing Water Cube, authoritarianism lurks. Current events are proof.

So if the bullies are back (Russia at the center of that maelstrom) they’re back in part because they never left. Or perhaps because the giddiness of post-1989 made Communist-free Russia appear to equal Czechoslovakia and Poland, both of which unlike Russia operated functional democracies into the 1930s.

Soviet communism, far from aberrant, was little more than a wildly terrible offshoot of an 800-year history dominated by whimsical tyrants more zealous about making inroads in Europe than playing fairly at home. Soviet disintegration, billed by its engineers as democratization, witnessed the transfer of power from septuagenarian autocrats to a younger, more stylishly sophisticated group, many trained under communism. Concentrated wealth became a prestige tool (the Soviet Union was perpetually broke). State power was blunted, or applied less egregiously. Gulags vanished. Public freedoms were tendered in greater quantity but repressed when considered inconvenient.

The Chinese “opening,” meanwhile, stemmed from a protean eagerness to participate in, if not profit from and pace, competitive international trade. In China’s case, the ultimate window-dressing came in the form of bidding for and staging the Olympics, a form of national exhibitionism that the United States, the Soviet Union and both Nazi and West Germany have all used over the decades.

In essence the “beaten” Soviets and the post-Mao Chinese leadership decided play at the West’s slots hoping in stages to partake in cash flow and later influence drink selection. Neither nation abandoned its xenophobic manifest destiny or brass-knuckles nationalism. Neither stopped winnowing out riff-raff. Edges were softened. History got a new set of work clothes.

The invasion of Georgia, for example, reflects a Russian leadership at war with democratic constraints if often finds odious. While high-stakes trading may gild Moscow’s jet-setters, the Kremlin’s assertive nostalgia is not so easily assuaged or bought off.

A thorn in Moscow’s side, Georgia turned hazardous the instant Eduard Shevardnadze was shoved aside in 2003. Though never easy, Shevardnadze had consummate insider status. His departure left Vladimir Putin to negotiate with adversaries who aggressively paraded their NATO and pro-Western preferences. Major oil and natural gas pipelines flow through Georgia. The nation also has a port, which Russia envies. For Putin, Georgia’s Western-funded ascent came free, and at Russia’s strategic expense.

Few noticed the gathering wrath, even when Putin laid it out vividly. Eighteen months ago, he put on a spectacular show in Munich. “What,” he asked rhetorically, “is a unipolar world? It refers to one type of situation, one center of authority, one center of force, one center of decision-making. It is world in which there is one master, one sovereign. This is pernicious … unacceptable … impossible.”

The tired was excused to hysterical anti-Americanism, or worse still trifled with. Little man, second-rate power.

Putin, a wolf in a tuxedo, is tidy mix of Peter the Great, Stalin, and Cheka mogul Felix Dzerzhinsky. He has none of Boris Yeltsin’s uncle-crass grossness and is at home with Italian intrigue (Silvio Berlusconi is a close friend). His “unipolar” challenge was delivered as Western Europe dependence on Russian natural gas deepened. It also came while the European Union — urged on by the United States — eroded Russia’s one-time protective layer. One by one, former Soviet dependencies pledged to the EU and NATO. Former slave states and enemies Poland, Hungary, the Czech Republic talked to the United States about missile deals.

This is what Putin found “pernicious, unacceptable, impossible.”

When the Bush Administration drum-rolled national security into a justification for invading Iraq, sovereignty got its postmodern baptism. Infatuated patriotism trumped national borders and Russia was gifted leverage. Attacking in the name of security would bring only rebuke.

With Washington peddling its influence in Ukraine and central Asia, Putin took his punch, using revanchist South Ossetia — its capital Tskhinvali under siege by Georgia — as a pretext and lubricant. He guessed rightly that European protest would be balanced by natural gas needs. He presumed correctly that the United States would be crippled by public doubt over Iraq. By acting when the world was focused on the Olympics (and the United States on Michael Phelps’ body) he was also right in assuming attention span would be limited. He even had the added satisfaction of annoying the rival Chinese, whose meticulous leadership had pre-booked August as its own.

When Russia makes up its mind it is not a democracy. Nor does it care what others think. As the Soviets did with Prague and Budapest in harsher days, Russia cruelly scolded an arrogant upstart. The Ukraine has already sought assurances it won’t happen to them.

AMERICAN WRITERS, swamped by Phelps, struggled for balance. The New York Times‘ Bill Keller said the invasion represented “springtime for autocrats, and not just the minor-league monsters of Zimbabwe and the like, but the giant regimes that seemed so surely bound for the ash heap in 1989.” For liberal economist and columnist Paul Krugman, the Georgia invasion, “while not that big a deal” economically, marked “the end of the Pax Americana — the era in which the United States more or less maintained a monopoly on the use of military force. And that raises some real questions about the future of globalization.”

What these optimism-torn-asunder remarks disregarded was the absence of an original ash heap. Political systems are birthmarks. They don’t vanish. In Russia, a conglomerate of new-rich marauders replaced communism’s ruling class cannibals and now frolic with coolness in a newfound international playground. Nonaligned Russia resembles Carpetbaggers-unto-Roaring Twenties America, a sprawl of major and minor robber barons serious about grandeur, money, expansion, and often decked out in love of country. The latter is no laughing matter. Chechnya, lacking pipelines, NATO contacts, and occupied mostly by Muslims, was crushed because it could be.

Even former Soviet President Mikhail Gorbachev, now a pro-West think-tank consultant, backhandedly defended the Motherland: “The [Georgian] planners of this campaign clearly wanted to make sure that, whatever the outcome, Russia would be blamed for worsening the situation. The West then mounted a propaganda attack against Russia, with the American news media leading the way.”

A closer look at the map puts Russian recurrent apprehension in perspective. The EU’s eastern expansion, and NATO’s, bumps up against its borders. Its southern territories are only a thousand miles from Iraq, where 200,000 U.S. troops are stationed and fighting. Stretch east and you get to China and North Korea, neither one friendly.

There are no politics without geography lessons. Between 1800 and 1950, Russia was invaded by Napoleon and Nazi Germany; two losing campaigns that cost 100 million lives. In the age of Michael Phelps, these are incomprehensible numbers. They do help explain resentful national mechanisms.

“We are more tolerant of our home-grown bullies,” Chrystia Freeland wrote in the Financial Times, “if we think we need them to fight our enemies abroad — as even democratic America has demonstrated in recent years.” Yet Saddam Hussein was very much a home-grown bully, an American test-tube rat fortified into Frankenstein.

But the rest of Freeland’s remark is stupefying.

Who is the “we,” and on what basis does it assert superiority? Who are “our” bullies?

Really? Grown in whose home?

Just as Italy’s Berlusconi fails to fathom conflict of interest because it’s all he’s known, Putin resents a Russia perceived as a malignant outgrowth, and responds to such characterization with a primal gavel.

It’s not the end of history that bothers him but its insulting. Unacceptable, he said, and meant it.