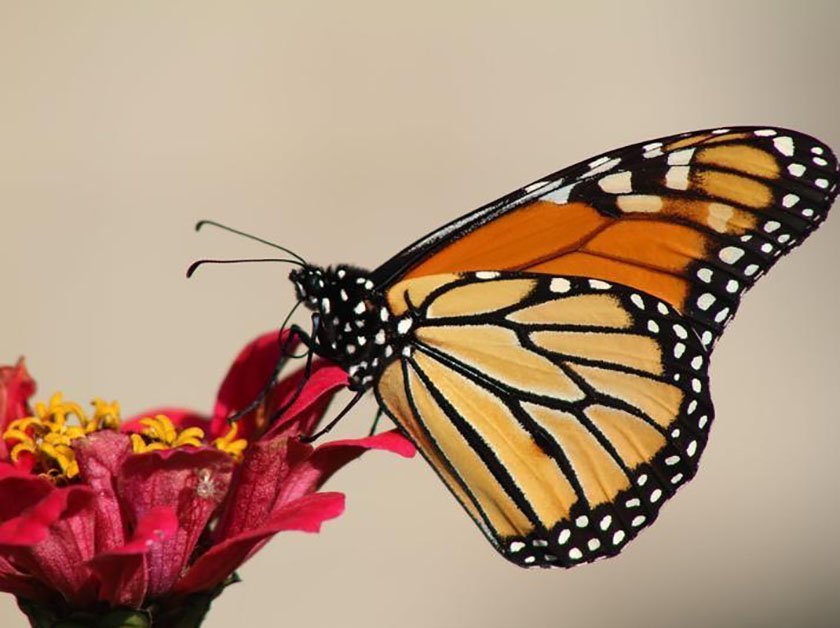 Butterflies are the supermodels of the insect world, which means roaches don't stand a chance.
I

n the past month, I’ve encountered two big roaches in my car. A while ago, I wrote about my fear of roaches, after having found one in my Florida bedroom, and fearing it would end up in my bed — a chilling experience that would come later.

But the prospect of finding a roach in my car had never occurred to me. My car is my safe haven. Driving is my down time. I love listening to the radio and driving into the fuchsia sunsets of North Central Florida, where the skies seem more massive than any place I’ve ever lived. The roaches disrupted my revelry.

The roach crawled out of the coaster, its tell-tale shoe polish brown back flickering in the dark.

My first car encounter came after dinner at a friend’s. As soon as I sat down, the roach crawled out of the coaster, the glare of its tell-tale shoe polish brown back flickering in the dark. I screamed and promptly got out of the car. My friend then spent about 45 minutes with a handheld vacuum, trying to suck up the roach. Occasionally, he would let out a little gasp. “Did you get it?” I’d say, both excited and relieved. “No, but I’m finding all these ants. Where did you get all these ants?”

“I don’t care about the ants!” I replied, exasperated. “The roach. Where is the roach?”

Eventually, he swatted him out of the car. My entire body tensed, I drove home with the lights on in the car, since roaches don’t usually prowl around in brightness.

The author’s daily source of inspiration.

I saw the second roach in broad daylight on my way back from my mid-morning coffee run. Fortunately, I’d already turned into my street when I spied it, again around the coasters. Stiff with fear of the roach, and fear that I would crash the car, I sped home and stayed put for 48 hours. Later I figured out the likely reason for the sudden appearance of my new driving buddies: piles of damp leaves lining the crevices of my hood and trunk. Roaches love moisture; they can also squeeze through surfaces as slender as a penny.

My terror of roaches, I know, is ridiculously irrational. This sunk in hearing my two-year-old daughter Julia, aware of my fear, tell me, “But a roach is like a butterfly.” We were driving, and startled by her astute analogy, I looked at her through the rear-view mirror. “Did daddy tell you that?” I asked her. “No,” she said, which I later confirmed.

It’s true that roaches are as harmless to humans as butterflies. And in Florida, some roaches, called palmetto bugs, do actually fly. For me, the only thing worse than a roach is a flying roach, but Julia’s imaginative wisdom pleased me — in theory, at least. I’ve yet to have another encounter with a roach on which I can test my nerves.

Julia’s comment also made me wonder: When do we start really listening to our kids? Or rather, when do our parents start listening to us, coopting our wisdom as their own?

My father began listening to me a few years after my mother died, when I gave him dating advice. My mother heeded my words much earlier. I remember being four or five, studying the intricacies of my hands — little lines, veins, skin — and wondering aloud, “I wonder why we are all here.” My mother was driving, and startled, a bit like I was upon hearing Julia’s butterfly analogy, she looked at me through the rear-view window and said, “What did you say?”

“But a roach is like a butterfly,” said Julia.

Years later, again in the car, my mother and I were delivering newspapers, my first job while I was in junior high. The front-page headline that day was about the imminent war in Iraq, and the possible reinstatement of the draft. My mother had lost a boyfriend in the Vietnam War, and the trauma never left her. My brother was almost of draft age, and she worried.

“Mom, he’s not going to war,” I said, casually. I had no real basis for what I said: Not yet a newshound, I hadn’t even read the newspaper. But my instincts just told me that my brother wouldn’t be drafted, and that even if the draft was reinstated, he wouldn’t go to war.

That I was right on both counts had little to do with insight, and everything to do with homespun wisdom that I’d invoke from time-to-time, mostly to calm my mother, my faithful audience. She thought I was wise, so I became wise.

At the end of her life, too, she sought my counsel for the disease from which we both knew that she was going to die — if only, perhaps, to tell her that it was okay to go.