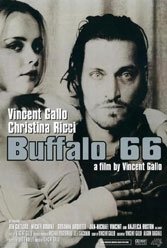 Vincent Gallo’s pent-up ferocity for once does him in exceptionally good stead. Just-released con Billy Brown (Gallo) decides it’s time to go home to Buffalo. Problem is, he’s lied to his parents about his five-year “absence,” writing them letters about a successful career and wife. Solution: Kidnap a girl to play his wife. He does, violently nabbing China-doll Layla (teenaged Christina Ricci) from a dance class. When she falls for him, you’d think Gallo was playing a Stockholm Syndrome card, but wait.

Turns out his blue-collar parents (Anjelica Huston and Ben Gazzarra, both superb) couldn’t care less about him, or her. Mom still rues a missed field goal that cost the Buffalo Bills a Super Bowl title, Dad’s a cruel loser, and Billy (named after the team) still owes bookie money over the lost game. So Billy decides its time to do something right for a change: Hunt down and kill Scott Norwood, who player missed the infamous kick.

Once Gallo gets Billy home, the narrative turns into a grim but bleakly funny account of a misfit, self-despising man who wants most to impress his parents and win their love, a trait they’re obviously incapable of manifesting. He vilifies kidnapped precocious Layla because she’s the only person who does care. The two are absurdly perfect. Everything about ’66 has autobiography’s fine-tuned venom: It should; Gallo’s from Buffalo.