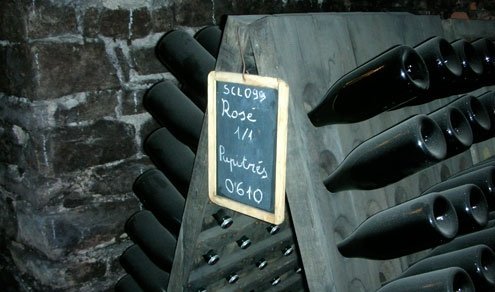 The cradling pupitres in the cellar. Photo by Eleanor Shannon.
C

ome quickly, I am tasting the stars!

Monk Dom Pierre Pérignon’s description of the bubbly concoction he conjured up four centuries ago is still part of wine folklore. But Italians Franco Ziliani and Guido Berlucchi may have felt the same way in 1961 when they used the “champagne method” to produce 3,000 bottles of Italian spumante near Corte Franca northeast of Milan.

After a recent tour of the Guido Berlucchi cellars, I sat down and shared an aptly-named Berlucchi ’61 spumante with Ziliani, a small man with a large presence. “My dream, 50 years ago, was to make a champagne-like spumante at an accessible price.” With an annual production of 300,000 bottles at €25 a bottle, Ziliani can now smile.

Since “champagne” can only be accurately applied to wine from the Champagne region of France, the Italian version is known as “metodo classico” spumante, or “classic method” sparkling wine (which means more than 3.5 bars of pressure in the bottle). As with French Champagne, Italian metodo classico is usually produced in a cuvee, or mix, of several years production (with no year inscribed on the label).

In second fermentation it stays on the yeast, or lees, in the for at least 18 but up to 80 months. This can give the wine a slight smell of freshly baked bread. In especially good years, a producer may make a millesimato — or vintage — from a single year, which is then printed on the label.

The key point is that all metodo classico spumante, like champagne, is made with two fermentations: the first in vats, and the second in the bottle.

In Dom Perignon’s time, the second fermentation was actually something vintners tried to prevent. Champagne’s cool climate meant grapes tended to ripen late and be harvested late. The low autumn temperatures often stopped fermentation so that wine entered bottles only partially fermented. In the spring and summer, when the weather warmed, fermentation would begin in the bottles themselves, with the pressure either popping corks or causing the bottles to explode.

By the late 1700s and early 1800s, bottles and corks were stronger and entrepreneurial winemakers such as the Widow Cliquot (founder of “Veuve Cliquot”) marketed bubbly wine to French nobility as well as to the English and Russian elite.

Among Veuve’s most famous inventions was the system of remouage, where the bottles were spun daily by quarter turns as they lay at an angle in wooden racks called pupitres, their necks down and bottoms up. Profit sharing with her employees helped the window keep remouage a secret for a decade, infuriating her biggest competitor, Moët.

The most exciting part of the Berlucchi tour came when my guide took a bottle that had completed remouage and dipped the neck briefly in super cold liquid to freeze the old yeast and sediment in the neck. He then tapped underneath the cork so that unwanted frozen particles popped out in an explosion of fizz.

After this procedure, known as dégorgement, the liqueur d’éxpedition (a combination of brandy, cane sugar and possibly aged spumante or champagne) can be added. Metodo classico without liqueur d’éxpedition added is called “no dosage” or “pas dosé ” or “dosage zero.” Other classifications are: extra brut, brut, sec, demi-sec, and doux.

Guido Berlucchi has award-winning neighbors in Franciacorta, including Bellavista, Cavalleri, Marchese Antinori, Uberti, and Ca’ del Bosco. Ferrari dominates Trento, producing 2.5 million bottles of its basic Brut and 900,000 of the Maximum Brut, both in the €26-27 range.

In addition to the reasonably-priced Zeliani model, there are elite metodo classicos whose prices compete with those of the best champagnes. Among the most heralded are:

While metodo classico yields 20 million bottles annually, far more spumante (more than 200 million bottles) comes from the metodo charmat method, in which both the first and second fermentations occur in vats.

Two of the most celebrated are Asti — sweet and aromatic, made with moscato grapes in Asti, Piedmont, and Prosecco — crisp and dry made from prosecco or glera grapes in the area near Treviso in the Veneto. (Stay tuned for Prosecco next month).

For the record, some spumante is made by simply pumping CO2 into still wine. This could be called the “Coca-Cola method,” and quality never enters the picture.