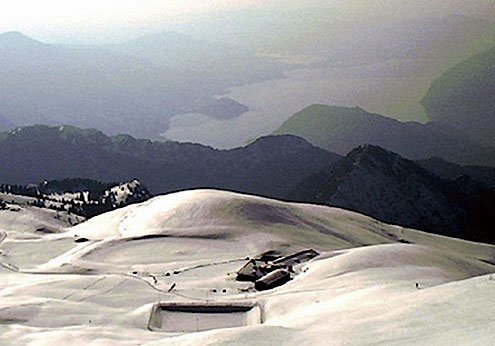 The vast Lago di Iseo vistas are stunning in summer and winter.
W

hat could be nicer than sipping champagne and enjoying a lovely view? How about doing it close to home. My husband Dan and I recently took an overnight trip to Iseo Lake. Iseo is in Franciacorta, a part of the Brescia province known for its grape-friendly soil. The 13th-century name Franciacorta is thought to derive from curtus francae, the name of the fortified courts of Frankish realm once ruled by Charlemagne.

Dan and I immediately did some wine touring. In Contadi Castaldi in Adro, we got a taste (literally) of the classic, double fermentation method: the producers place bottles in racks that hold them at a 45 degree angle, necks down to rid the bottles of yeast particles left after fermentation. Daily over eight weeks, they turn and tilt each bottle downward until they are nearly upside down. With several hundred bottles in A-frame racks, this activity keeps them busy. After turning and shaking, they disgorge the bottles by opening them, removing the sediment and adjusting the sweetness. Then they are re-corked and ready for sale. Dan and I bought several bottles of Franciacorta.

Next we visited Lantieri de Paratico in Capriolo, a much smaller winery. The Lantieri family has been producing wine for centuries — they were among the first to begin regular production. At Lantieri, dozens of bottles are now placed in steel cages where state-of-the-art equipment turns them automatically. Even if automation takes some of the romance out of the production process, the bubbly doesn’t suffer at all. Lantieri makes wines that would make French Champagne producers weep.

We stopped in Erbusco for lunch at Gualtiero Marchesi, not the easiest place to find, but worth the effort. The restaurant is named after the chef, who was trained in France.We both had the degustazione menu, which offers a small portion of all his best recipes. One unforgettable dish was riso, oro e zafferano — rice, gold and saffron, with a real gold leaf atop the risotto. Gualtiero Marchesi himself came out to see how we were enjoying our meal. We broke our previous longevity record: this was a three-hour lunch.

Dan and I returned to the hotel to watch the sunset over the lake and hills from our balcony and enjoyed one of our purchases. After dark, we walked to the beach. The lights on the hills across the lake looked like fallen stars. There was magic in the air — not the product of champagne bubbles alone. The clear night sky had a sliver of a moon. Our shared dream of living in Italy seemed better than we had imagined.

The next day we went into the town of Iseo, which as part of the Venetian Republic beginning in 1427 was a vital wool-producing center for centuries. Iseo’s newly-expanded center has extensive pedestrian areas.

We lunched at Il Volto, a place with friendly atmosphere and wonderful food. Prosecco is a great start because it cleans the palate and gets you ready for the meal.

They served a delicious risotto with wild game and licorice powder. Don’t wrinkle your nose and think of black licorice whips. In the absence of sugar, licorice has a rather cinnamony flavor. It made me want to hunt for licorice powder, perhaps at an erboristeria, an herbal shop.

We saw an adorable four-year-old girl having lunch with her family. She snuck over near our table to get the empty wine bucket stand. Just as she was about to get it, she noticed Dan watching her. He smiled and winked at her and she giggled. Now she had a co-conspirator. She took the stand back to her table and set her dolly in it. It made a great dolly highchair. After our two-hour lunch, we sighed, and headed back toward Milan. This was our second overnight trip to Iseo, but it will not be the last. Until then, we will enjoy our memories and bubbly on our balcony in Milan.

Gualtiero Marchesi Fine dining with two marvelous views: the hills of Franciacorta and the kitchen activity. The service is attentive but unintrusive. Gualtiero Marchesi himself will come visit your table when he’s not busy supervising the kitchen. The cuisine is modern Italian with an international style. The dishes are unique and inspired, accompanied by a large but discerning wine list. Bring your appetite and a sense of adventure. The restaurant is part of the Hotel L’Albereta at the top of the hill in Erbusco. Expensive, at around €145-160 per person, wine excluded. Major Credit Cards. Closed Sunday evening and Monday. Via Vittorio Emanuele, 11, Erbusco. Tel. 03.077.605.62. See marchesi.it

Il Volto Enjoy the friendly and relaxed atmosphere of this wine bar and restaurant. Il Volto is creative: risotto with wild game and licorice powder; pasta with lamb and pistacchio ragù or oysters; mozzarella and (yes) sea water. The staff can be trusted for excellent yet reasonable wine suggestions.

You can buy wines directly from the vineyard or wholesaler at a cantina. If you are interested in taking a tour of the facility, it is always best to call ahead and arrange a tour. Some producers will not accept fewer than a dozen people. The weekend we toured was a Cantine Aperte (open cantinas) event for all of Franciacorta. For a small fee you can tour various wineries, with tastings at each. Because wineries tend to be located at some distance apart, it is essential to have a car and a designated driver. Having a car also makes it easier to bring your purchases home. Find out about Cantine Aperte events throughout Italy at movimentoturismovino.it For a good list of Franciacorta cantinas online see cantinefranciacorta.it

How to Day Trip

Day trips can originate anywhere. The best ones are carefully planned and not more than two hours from home. Sometimes a destination merits more time, which was the case with Iseo. Although Iseo and most of Franciacorta are accessible by train, the wineries we wanted to visit were not. In this instance, we rented a car in Milan and drove.

We found the two restaurants we dined at (above) in “Ristoranti d’Italia del Gambero Rosso” (€20, Gambero Rosso). Another valuable restaurant resource is “Osterie d’Italia” (€20.14, Slow Food). There is surprisingly little overlap between Gambero Rosso and Slow Food. Finally, there is Michelin’s “Italia 2006,” also known as the “Red Guide” (€22, Michelin Italiana), which also lists hotels. For online restaurant information, see: gamberorosso.it or slowfood.it