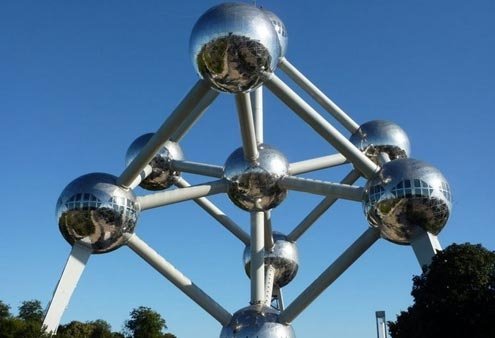 n the northward flight from Rome to Brussels, after we passed the snow-tipped Alps, the earth below clouded over. The thick shag carpet of clouds was expected, as was the rain that came spitting in sideways once we arrived outside in the city.

Dreary weather takes a leading role when I travel from the sunny Mediterranean to the Low Countries. The contrast makes me wonder, “How do people live here?” And since two good friends have moved back to Brussels, answers were forthcoming.

One of the best ways to deal with bad weather is to go inside. Soon after leaving the Gare Midi we were clutching a warm cone of twice-fried Belgian fries topped with mayo and heading to the

Maison de Peuple (Parvis Saint-Gilles, 39) on the Parvis de St. Gilles. Once inside I was pleasantly reminded of the inviting Belgian café atmosphere. The large wooden tables were full of others escaping the rain and we lingered over coffee and celery soup that tasted something like my grandma would have made.

Outside, Belgians seem to stay warm by drinking copious amounts of heated alcohol. At the Christmas Market on the Place Sainte-Catherine, wooden cabins offered mulled wine, shots of Jagermiester and a hot, sweet rum drink that went right to my head.

When the drizzle picked up to a pour we crowded under a tent with our drinks. Around us the market continued despite the rain. The smell of salty escargot mingled with fried sweets. Strings of white Christmas lights adorned the cabins and led to the far end of the square where an enormous Ferris wheel turned like a perfect snowflake. The setting was surreal.

A Christmas Market highlight, for kids and adults alike, were two spectacularly innovative carousels that travel each winter to Brussels from Nantes, France. Around and around the kids rode a Soviet-era spaceship through the awning, drove a rearing beetle with reins, steered a winged pterodactyl and shook a dummy’s head dizzy.

The mesmerizing creatures and outdated contraptions were built in old-style copper and iron by Les Machines de l’Ile. For a moment I was jettisoned to a time where plastic pop culture did not exist.

But the most surrealistic attraction in Brussels is The Atomium, and you can visit it any time. We took a tram to the northern suburbs through the prolonged twilight of New Year’s Day. The first glimpse of lit spheres hovering through the bare trees prefaced the strange sight we were in for.

The Atomium is one unit cell of an iron crystal blown up 165 times. Built for Expo ’58, the 1958 World’s Fair, it is claimed to be the futuristic symbol of atomic energy for peaceful purposes. The structure of balls and rods has become a landmark of Brussels, drawing almost as many tourists as the mini Manneken Pis. Visitors can ride escalators to exhibitions and observatories, but we opted for a stroll through adjacent Heysel Park instead. Once fair grounds, the old forest dripped shadows in the late evening and framed the space age Atomium as more dystopian than any imagined utopia.

Hungry, cold and wet we returned to the city center by the timely metro. Unlike Rome, Brussels offers an array of ethnic restaurants and we soon found ourselves eating tasty Vietnamese food paired with French wine at Da-Kao II (Rue Van Artevelde, 19). And while I’m on the subject of food, no trip to Brussels is complete without an enormous bowl of piping mussels, which we indulged in on another rainy day at the Hotel Orts Café (Rue Auguste Orts, 38).

But if Brussels isn’t exactly known for its array of gastronomic delights — fries, waffles and chocolates aside — it’s certainly known for its beer. And drinking beer in a crowded Belgian bar is another excellent way to stay warm.

At the end of an afternoon, after catching the tail end of the Jeu de Balle flea market, we dove into busy Brasserie Verschueren (Parvis de Saint-Gilles, 13) in what appeared to be the full swing of happy hour. Beer foam slid down glasses of golden Jupiler onto rustic tabletops pressed as near together as in a Roman trattoria. The air was voluble like the voices, and the bright overhead lights kept out the grey day that lingered behind the large paned windows.

Back on the plane from Brussels to Rome, as we approached the more heavily snow-tipped Alps, the ground below cleared. The crystal mirror of Lago Bracciano was visible in the half-minute we flew over it. Not two steps outside and I realized that in the six days I had been in Brussels, I had somehow acclimatized to the wet and cold, so happily I took off my coat.

— Brussels is served by two airports: Brussels International and Brussels South Charleroi. From Rome, low-cost Brussels Airlines flies nonstop from Fiumicino to the International airport, while Ryanair flies out of Ciampino to Charleroi. For carriers traveling to Brussels from other Italian cities see Jet Air and Wind Jet.

Four trains an hour connect the international airport to Brussels, arriving in each of the three stations: North, Central and Midi. The trip by train takes about fifteen minutes. From Charleroi there are shuttles to Brussels that leave every half an hour after the arrival of each Ryanair flight and cost €13 each way. The drive will take about 45 minutes.

— The Atomium can be reached by the metro line #6. Get off at the Heysel/Heizel Station.