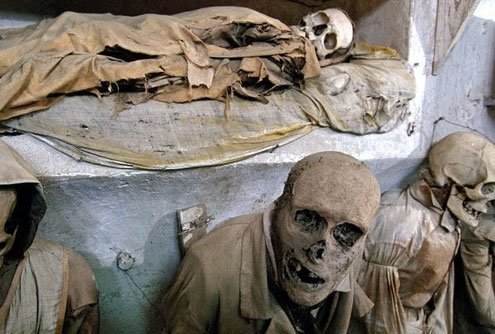 What you are now, we once were. What we are now, you will be.
F

ar from the grim caverns of sepulchral terrors I was expecting, the Capuchin Catacombs at Rome’s church of Santa Maria della Concezione, near Metro Barberini, were as warm and pleasant a set of crypts as you could hope to fester among. I can certainly think of worse places to while away your hereafter than in the midst of your monastic brothers’ bones, in an ornate and cozy little cemetery.

This unusual resting place contains the remains of some 4,000 friars buried between 1500 and the late 1800s and contains an underground crypt divided into five chapels. Strikingly, the walls are decorated with individual bones — used to create ornamental designs — and some complete skeletons still sporting their Franciscan robes. In a rather touching wish to remember their past brothers, the Friars upped-sticks in 1631 and moved to the current church from their former home near the Trevi Fountain. Not wishing to leave anyone behind, the remains of the deceased brethren were transported and laid to rest in a new home among people who would keep an eye on them.

The church itself isn’t especially glamorous from the outside, but having paid a one-euro donation to enter the crypt, you’re permitted to descend a small set of steps and gawp freely at the bones (phones and cameras off, for both the dignity of the dead and conservation of their remains). In each small chapel is a different arrangement to celebrate alternate parts of the skeleton — the chapel of the pelvises or skulls, for example. For me, a former archaeology student, it was fascinating and quite beautiful. Most interesting to me were chapels five and six.

The former, number five, was the crypt of tibias and femurs, which came with an earth floor strewn with flowers and 18 crosses. It was, I imagined, a bit like viewing a normal outdoor graveyard from the inside out, something we’re not likely to do when our own time comes. Two arms — still with some skin in tact — are pinned, limp-wristed, to the back wall echoing the wooden sculpture you pass as you enter the crypts. The multi-lingual volunteer at the entry kiosk explained to me that this symbolizes an embrace of love, for Jesus, your fellow friars, your family, even your boyfriend or girlfriend — whoever you fancy hugging. Rather sweet for a pair of de-fleshed arm bones, I thought.

As for chapel number six, the back wall was decorated with what looked like two child skeletons and a central skull, its mouth stuffed haphazardly with other bones. On the ceiling in this final chapel is a skeleton posed as the Grim Reaper, his scythe and scales made also from bones. Here, pelvic bones are used as wings to frame grinning skeletal angels and scapulae make pretty patterns all over the walls and ceiling.

I sat on the back steps making notes and enjoying the ambience — peaceful and serene save for the odd tourist namedropping zombie films and busting out dance moves from Thriller. A sign in multiple languages takes centre stage in this last crypt, and it declares a message from the dead: “What you are now, we once were. What we are now, you will be.” Not such a menacing thought once you’ve grown accustomed to your macabre surroundings and realized what a fond shrine it all is to the continuing memory of many a beloved brother.

About the Author: Laura Rainbow

Laura Rainbow is an English journalist working as a teacher in Rome. She graduated with a degree in archaeology and ancient history from a British university but somehow ended up writing travel features for various publications in Europe and Oz.