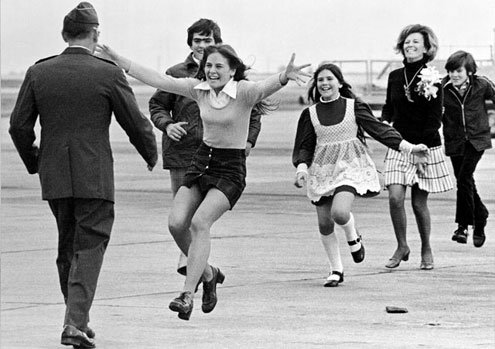 In Vietnam, admiration for the enemy, and the food.
M

y older brother and I have always shared a love of food. When he lived in Monterey, California with his first wife (a great cook in her own right), we’d visit from Los Angeles or Rome and he’d take us first to the Monterey pier, where Sabu Shake presided over Old Fisherman’s Grotto. Sabu founded the small Monterey eatery in the late 1950s and it’s still family-run decades later. He’d hand out samples of his famous clam chowder and tell tales of his days in Pakistan. He’d acquired some fame in his own right as a stunt double for the star in “Elephant Boy,” a film based on a story from Kipling’s “The Jungle Book.”

My brother was much like Sabu in his gregariousness. He’d talk and listen to everyone. We couldn’t go to a restaurant without his chatting up waiters and the cooks and learning about what motivated them to go into the food business.

All was stored in the most astounding memory, which included every war strategy ever devised, when it was fought and who won. To this he added knowledge of marching songs and their myriad stanzas, with which he would occasionally delight us, singing in Russian, Czech, German or English, without much tone but with hilarious facial expressions.

A student at Rice University at age 15, he was admitted to West Point at 18, rising to the rank of lieutenant colonel and eventually serving as a liaison for a South Vietnamese commander during the Vietnam War. He had considerable admiration for “the enemy,” the North Vietnamese regular military and the militia Viet Cong, saying he’d never before witnessed such perseverance and dedication to winning.

And he loved the food.

Once back from the war, he feted us with Santa Barbara shrimp, split and grilled with lemon butter or olive oil, or thick steaks cooked to medium-rare perfection. It was my brother who taught me that for fish, 9-10 minutes per inch was perfect, and I still use that as my method. At the pier, he’d buy sea bass or salmon or, more likely, he would have befriended a fisherman and come home with whole beauties for filleting, grilling or roasting in the oven.

On the rare occasions that when we’d meet in Houston at our parents’ house (he was stationed out of the country so often that I was an only child for much of my youth), we’d sit in the kitchen, devouring a ridiculously large vat of fresh-shucked oysters with lemon and pepper or a pile of huge gulf shrimp (steamed n what was known then as Crab Boil to which our mother, a gourmet, had added a good slosh of dry white wine). We peeled the oysters on spread-out newspapers and dipped them in my mother’s famous sauce remoulade or a red sauce laced liberally with horseradish.

When my brother and second wife shocked us by moving to Hunt, Texas after 20 years in California, we found a changed man. But he was still the most generous and hospitable of hosts, offering sunset drinks without fail and stoking up his Weber to grill tenderloins of venison served with my sister-in-law’s just-baked focaccia. We’d also go to the local Tex-Mex restaurant for guacamole and chicken enchiladas.

But something had changed. My brother wandered into the kitchen to talk with the owner, and that was strictly forbidden. He embarrassed the owner’s young daughters by lavishing them with compliments on their beauty or walk over to tables of complete strangers to make conversation. He mostly made them uncomfortable.

I learned my brother had suffered a stroke in Monterey. He was now slipping into dementia, his brilliant mind slowly undone.

We visited him recently and listened to his Irish tales as we feasted on brisket and onion sauce on St. Patrick’s Day. Yet the studio where he had made collectible toy soldiers was untouched, and had been for two years.

We sat on the porch and I commented on the beauty of his land. “Yes, ” he said, “some days I just sit out here for hours and gaze at the oaks, with the soft South breeze on my cheek. We are surely blessed.”

He wasn’t. His wife was sadly obliged to put him in a nursing home after two long and difficult years of home care.

Food was still on his mind, but in the saddest of ways. “They’re not giving me my lunch!” he lamented to his wife. This would have been a sacrilege for my food-loving brother. But he’d had his lunch an hour before.