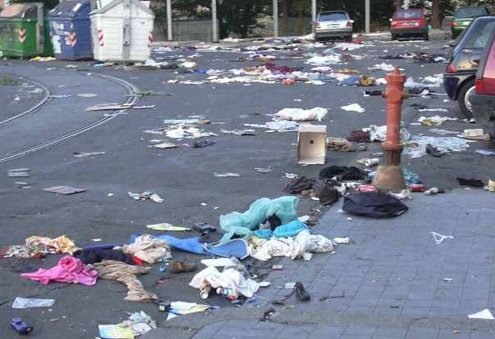 Trash near Stazione Tiburtina.
I

’m a tree hugger. Not that I hug trees, I only really sacrifice some minor comforts for trees, or the idea of trees. A guy I know strapped himself to a tree to try and stop a section of the Black Forest from being cut down for a new runway at the Frankfurt Airport in the 1970s. He’s more of a tree hugger than me, since he actually hugs them. But we’re made of the same (biodegradable) stuff.

In my three years in Rome I’ve understood that Romans think Americans are ignorant, especially when it comes to war, the overuse of energy, and the affluence and waste that drove us to excess. I can see their point: Americans eat their free-range organics in air-conditioned houses with lights and computers on in every room and the dryer running. That makes me angry too.

But what then about the Roman I saw drive his motorino from his apartment to the newspaper stand and back yesterday, a one block trip.

Europe has the Dutch biking all over the place, the Swiss and their 2,000 Watt Society, the Danes and their island, Samso, which sustains itself on wind energy and exports what it doesn’t need. Europe also has the Italians, whose recycling system, at least in Rome, is an inefficient sham.

So why does Rome get a pass? Didn’t the signing of the Kyoto Protocol in 2002 obligate them to care more? I don’t need to be a tree-hugger to think the city’s crazy dirty and unkempt. More than once I’ve carried around a sandwich wrapper or cigarette butt for the better part of an hour, never once passing a bin. My Roman friends cajole me, “Just throw it on the ground!”

Don’t get me wrong, I’m not judging. I’m just perplexed. The city is one of the most popular tourist destinations in the world and the Romans are intensely proud of it. Those seem like two pretty important reasons to keep it clean, without even considering the “caring about our planet” part.

Trying to make sense of Rome’s disheveled look, I turned to The Broken Window Theory, which suggests that the dirtier a neighborhood is, the more rampant the street crime. More street crime means the neighborhood gets dirtier. It’s a cycle: Don’t punish people for breaking the law and others begin to break it as well.

My friend Valentina worked hard to get a new car. Within months, her hood ornament was gone. Not Mercedes, Jaguar, BMW. Thieves stole a Honda hood ornament.

According to The Broken Window Theory, when a citizen sees another citizen getting away with something, however trivial, he or she follows suit. If graffiti artists and litterers aren’t punished, they’re home free. Nobody punishes the offenders, so everyone offends.

It makes sense. I mean, do you see lots of litter in Cologne or Munich? Does it make sense to try to ride for free on a German train? Not that I saw, even during Oktoberfest. If caught, I’d be afraid of never seeing my family again.

If you’re caught in Rome (big if), the police take down your name and number and maybe send you a ticket (big maybe), if it doesn’t disappear into the bureaucracy. Or you can pay a lesser cash penalty on the spot and get no ticket or receipt.

Stricter enforcement would help, but it’s no cure-all.

It’s more a matter of social responsibility, and neighborliness. Would you smoke around a little girl with asthma? It starts there.

I once washed my hair in the Mediterranean. The shampoo was all-natural and biodegradable but the tourists around me didn’t know that. They came after me. I was polluting the water their children swim in, they said. I showed them the bottle and they settled down a bit. I then asked them if they use organic laundry detergent. They might now.

Responsibility depends on the price you pay. Do you leave your heat on all day? No. It’s not free. Littering is like that. It’s free. For you. That’s the broken window in need of repair.