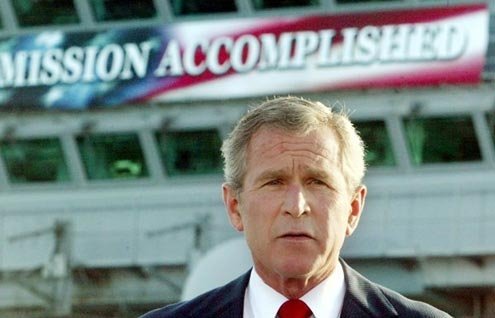 Mission accomplished when it wasn't, and couldn't be.
T

hat the United States would attack Iraq became clear to me in late summer 2002 while reading a front-page newspaper report in which American government sources anonymously insisted that Saddam Hussein posed a menace to both West and world. The sources connected Saddam to the going evil at a molecular level, like evidencing a malignant wart, a bad sign in bad times. The rhetorical forewarnings sizzled with forgone conclusions.

Visiting Washington at the time, I was struck by how little my 9/11-shocked friends knew about Saddam, the Gulf War notwithstanding. To them he was a zealot or a madman, or a terrorist mastermind.

The prepackaged party line that reinforced this simplistic view gave eager and impressionable journalists an adversary that was infinitely preferable to the only one they’d has so far, a bearded Golem hidden in prehistoric caves. Delineating a room with Saddam in it conjured greater gravity for writers and policymakers alike.

A former USA Today colleague I met for lunch spoke only the language of anxiety and panic. “You have no idea what’s it like living here,” he told me. “9/11, then anthrax, it’s like everyone wants to get to us. We could be under attack any day now. You just can’t imagine what we’ve had to endure.”

I found it strange that a smart, middle-class American earning six digits and living in the Washington suburbs would lap up official hyperbole so willingly. I chalked it up to the adrenalin of alerts and warnings. At stake, I was told, was the world’s collective future, which my colleague nonsensically considered imperiled. The mood was feral, visceral, emotional, unreal, if not surreal. Critical thinking was an annoyance.

When I reluctantly explained my own view, that Saddam was arrogant but weary tyrant whose one-time “Spanish Armada” had been broken by two decades of sanctions, my friend bristled. I wasn’t reading carefully enough, he told me. Saddam was a terrorist, the ultimate extremist armed with chemical, nuclear and biological weapons. I saw a phantasm; he saw Hitler.

Saddam, I replied, was a Cold War-era despot in the vein of Libya’s Moammar Qaddafi, grosser versions of Hosni Mubarak and Bashar al-Assad, converts to the business suit look. As a class, the men were self-loving secularists supported and protected by perk-rich armies in a testosterone-rich region that measured assertion in Stalinist terms.

If Saddam hated Washington, which had turned on him, he detested Osama Bin Laden more, since Islamism posed a more direct threat to his longevity. A rabid version of Yugoslavia’s Tito, he held together a religiously divided nation through police state tactics.

Our conversation took place in a diner plastered with American flags. Behind the bar was a photo of the Statue of Liberty and the line “God Bless America Always and Forever.”

My colleague rolled his eyes and told me I’d lived in Europe too long. “Surviving” 9/11 — a peculiar verb; he’d been far from harm’s way — had changed him as a man and as a father, he said. He was now smarter and tougher. My views were misdirected liberalism.

Within six months, Saddam’s Iraq had been successfully transformed into a global threat. Articles and television reports turned menace into caricature while so-called investigative reports had a B-movie feel. I’d never seen anything like it. Thankfully, I was back in Rome, where leveler heads (we the appeasers) legitmately doubted that Saddam’s removal would do much to curb Islamic extremism.

In hindsight, France’s misgivings were benign, and ultimately accurate. An invasion, said the French, would produce a lengthy commitment of dubious worth. That Saddam possessed nuclear weapons and daydreamed of a terroristic Armaggedon they considered a comic book fiction, something the Israelis knew but shrewdly kept mum about. Iraqi jets had bombed a nuclear reactor near Baghdad in June 1981. The Gulf War and sanctions did the rest.

But there’s no stopping a runaway train. An invasion seemed promisingly cathartic in the wake of an Afghan campaign that had chased out the Taliban but given the American public no single soothing event around which to rally. Alert levels remained sky high.

The rest is history, most of it sad. Nine years after the thrill and sizzle of warmongering followed by the shock and awe of real war, the childlike United States has pushed its broken toy into a closet and left. In Iraq, religious and political strife persists with an armada of mercenary contractors representing the country’s new pilgrims. Western and Asian states attempt to curry favor (and contracts) with a Shiite regime that is increasingly belligerent toward its eternally restive Sunni minority. The country’s intimations of democracy (a president and a parliament) are fragile and unconvincing.

The American and British leaders that falsified the invasion’s pretext are now memoirists and consultants who insist the world better place without Saddam, and it may well be. But that’s all they can say. The rest is debatable, which the invasion never was. Unlike any war in recent times it was plotted and carried forward in a vacuum. Dissent made no appearance until 2004.

What my editor friend was forced to “endure,” the Iraqis endured triply, yielding a Saddam-less chapter that Saddam still informs.