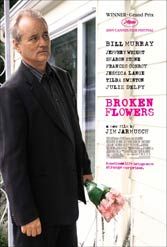 Believe it or not, Bill Murray can actually wear out the wan poker-face he loaned so successfully to “Lost in Translation.”

Jarmusch’s enternally compassionate intentions are undone by a linear plot whose social satire is so slight as to vanish. The wry, quirky humor that has served him so well appears rarely. At one point, Don calls himself “a stalker in a Taurus,” and so he is, with MapQuest perhaps the movie’s biggest star.