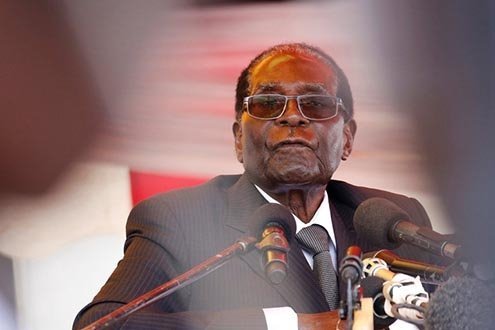 For Zimbabwe's Robert Mugabe gays and lesbians are "un-African" and "worse than dogs and pigs."
T

he saying “the sun never sets on the British Empire” is attributed to Scottish writer John Wilson. During Queen Victoria’s nearly 70-year reign spanning most of the 19th-century, Great Britain dominated world trade and took on the role of global policeman, enforcing what became known as the Pax Britannica. In many respects the British Commonwealth represented the first great experiment in globalization. But by the beginning of the 20th century Britain’s empire began to crumble.

I grew up in Canada. Queen Elizabeth’s image is on our currency. Canada’s political system, its laws and educational system are all inherited from Britain.

Even Canada had a national holiday, originally known as Dominion Day, which wasn’t a celebrated in any systematic way until the Canadian Centennial in 1967. In 1982 the Canada Act removed Canada’s dependence on the United Kingdom and Canada Day, July 1, became official. Before that, I remember Queen Victoria’s birthday. May 24 was celebrated annually with fireworks. I was taught to be proud and consider myself lucky that Canada was part of the Commonwealth, a great and important international organization that had all but brought civilization to the world.

But now, as an LGBTI person, when I look at the abysmal human rights record among present day Commonwealth member states, I must ask: what is it I’m supposed to be proud of?

Worldwide, more than 78 countries have anti-homosexuality laws. Of the 53 Commonwealth member states, 38 continue to criminalize homosexuality, many under archaic British colonial-era laws. British colonial rulers had imposed Victorian morality on the colonies because they viewed conquered cultures as sexually immoral. Yet even today, many national leaders continue defending sodomy laws as an indigenous necessity. Zimbabwe’s Robert Mugabe, for example, has called gays and lesbians “un-African” and “worse than dogs and pigs.”

A November 2015 report issued by the Human Dignity Trust in association with the Commonwealth Lawyers’ Association estimated that 174 million people who identify as LGBTI live in Commonwealth countries where consensual homosexuality is punishable by law.

Yet not once in 66 years have LGBTI issues been raised at the Commonwealth Heads of Government Meeting (CHOGM), despite urging from activists. LGBTI rights were again kept off the agenda at the most recent meeting in Malta in November 2015.

The penalties for private, consensual sex between same sex adults include 10 years imprisonment and hard labor in Jamaica, 14 years in Kenya, 20 years plus flogging in Malaysia, and 25 years in Trinidad and Tobago. Bangladesh, Barbados, Guyana, Pakistan, Sierra Leone, Tanzania and Uganda have a maximum sentence of life imprisonment, while in the 12 northern states of Nigeria the maximum penalty for male homosexuality is death. In some countries, such as Cameroon, people are arrested and imprisoned for “acts that indicate” homosexuality. In Uganda and Nigeria new legislation, if approved, would significantly increase the penalties for homosexuality. In 2013, the Indian LGBTI community was shocked when the Supreme Court of India reinstated a colonial-era law passed in 1860 that criminalized homosexuality, with a punishment of up to 10 years in prison for offenders.

“It’s simply appalling how people can be treated — how their rights are trampled on, and the prejudices, and even the violence they suffer,” said former British Prime Minister David Cameron said, adding, “I want Britain to be a global beacon for reform.”

He threatened to cut off development aid to countries that persecuted queer people. Britain later suspended £19 million in budget support to Malawi because of its poor progress on human rights, continued media restrictions, and persecution of LGBTI people.

Canada likewise provides direct and indirect funding to Commonwealth member states. With recent global developments many are looking to Canada as a human rights leader and some have called on Prime Minister Justin Trudeau to launch a realistic plan that would decriminalize and protect LGBTI people in Commonwealth states.

Baroness Patricia Scotland, the new Commonwealth Secretary-General, has called for reform, though she warned there must be a “consensus” on the issue. “We do not have the right or opportunity to force states,” she said, “but we can start a really good conversation to work with them so they understand the economic issues in relation to human rights and make the changes.”

Are you kidding! People are being persecuted, imprisoned, tortured, an executed throughout the Commonwealth, and you want to “start a really good conversation.” I wonder if good conversation and consensus would have resolved human rights atrocities such as the Holocaust or Apartheid.

I am left to wonder why Canada — or even Britain or New Zealand for that matter — is still a member of an international organization that has such a despicable human rights record and appears to be doing very little to change. It is a question that is unlikely to go away any time soon.