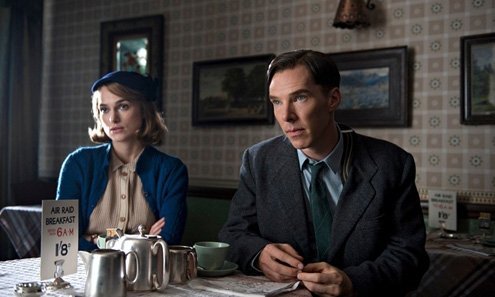 Keira Knightley and Benedict Cumberbatch in "The Imitation Game": a romanticized Alan Turing.
I

n 1985, British actor Derek Jacobi was cast as Alan Turing in the stage production of Hugh Whitmore’s play “Breaking the Code.” Jacobi’s Turing was mercurial, anguished and ragingly sad, a brilliant mathematician as much at war with his exceptional mind as with the homosexuality that would make him an outcast in judgmental England and ultimately lead to his suicide at age 41.

Whitmore’s interest was in humanizing Turing independently of his remarkable scientific accomplishments, a goal boosted by an unsentimental script and the immediate focus of the stage. The man who broke the Nazi Enigma code at Bletchley Park was himself an enigma, and his inner ruinations often as inscrutable as the code he worked to understand.

The latest Turing portrayal, in Norwegian Morten Tydlum’s movie “The Imitation Game,” strays far — too far — from Whitmore’s goals, ironic since both the play and the film are based on the same book, Andrew Hodges’ “Alan Turing: The Enigma.”

The film presents a wronged hero, Benedict Cumberbatch’s Turing, pitted against a British system that while valuing his accomplishments nonetheless drives him toward self-loathing to which he’s already prone.

It’s a rousing bit of moviemaking about awkward superheroes driven by Cumberbatch’s deftly restrained performance. Subtlety, however, is not a word it chooses to know. Here are “half-a-dozen crossword enthusiasts in the south of England” beating the odds while laying the groundwork for modern computer science.

Platitudes are neat and spoon-fed. Turing matters because he was a persecuted homosexual (gender awareness) who believed in the power of thinking machines (digital awareness) before anyone else thought to dream such machines might exist let alone have an intelligent dimension (honor your smartphone). Call it “sentimental revisionism,” smug means of making audiences feel good about how far they’ve come from tidily arranged bad old days — in this case forward toward more tolerant sexual attitudes and a greater appreciation of the wonders of the digital universe.

Tydlum switches between three periods in Turing’s life — his youth and growing fondness for student chum Christopher Morcom (whose early death led Turing to atheism); his arrest for indecency; his top-secret work at Bletchley with Joan Clarke (Keira Knightley), Hugh Alexander (Matthee Goode), John Cairncross (Allen Leach) and Peter Hilton (Matthew Beard). Taken as a whole, though, it’s a Masterpiece Theater-style production about a wrongly disgraced British hero that repeatedly turns to a line Turing once spoke to colleague Joan Clarke — “Sometimes it is the people no one imagines anything of, who do the things that no one can imagine.” — to keep Hollywood side in working order. Lisping Cumberbatch’s affecting presence perfectly serves such sentimental ends (just as big George C. Scott once perfectly served up the actually small Gen. George Patton).

Facts are rearranged and left bruised. Turing’s sexuality is romanticized based wholly on youthful love. Cumberbatch’s Turing is parochial, his 1942 trip to the United States ignored. Ignored also is the British debt to Polish cryptographers, who paved the way to breaking Enigma, as well as Turing’s considerable postwar accomplishments before his persecution and suicide. The circumstances of his arrest are also mangled. Shadings don’t suit an Alexandre Desplat soundtrack with hero-worshipping swells.

This is unabashedly feel-good fare (think “A Beautiful Mind”) with good guys and bad, absent ambiguity, eventually headed for tearjerker territory. Details about the Turing machine, his inner group’s camaraderie, and the presence Soviet mole are jumbled — read invented — to suit the needs of dramatic pluck. Bespectacled, plain Joan is turned over to sharp-eyed, not-plain Knightley, which is no surprise. Movies “based on a true story” almost inevitably depend on manipulative shorthand. But seeing Turing portrayed not only as a code-breaker but also as a kind of pseudo-military strategist warps credulity.

When history doesn’t matter, nor do its details — and actual history rarely contains the theatrics necessary to suit a film’s need for lesson-building resolution. Better then to break codes on stage.