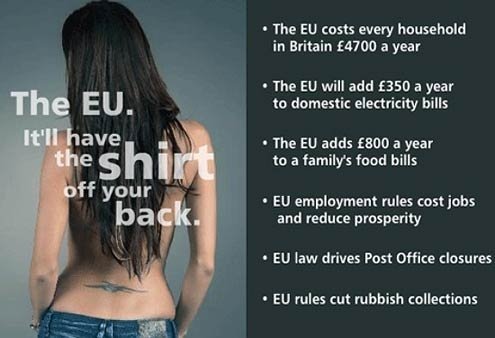 British euroskepticism — this campaign is from 2010 —has never been shy.
H

aving lived in Britain for almost six years, I understood early on that the British weren’t exactly pro-European Union. University debates between euroskeptics and europhiles raged strong, most starting rather politely at the end of a lecture only to end with both sides kicking and screaming in the coffee room.

But debate is a healthy thing, and in recent weeks observers on both sides of the fence have filled British broadsheets with their views. Journalists and experts are asking a single question, and it is not new: “What would it mean for Britain to potentially leave the EU?” For so long, such back-and-forth has seemed to melt into pure polemics. Not this month.

On Jan. 23, Prime Minister David Cameron promised that if he wins general elections expected in 2015 he would schedule an in-out referendum on Britain’s EU membership no later than then end of 2017. He spoke about Britain’s need for a better deal, including the repatriation of powers now held by the Brussels executive, and of finally allowing British subjects the public choice of whether to stay in or leave Europe.

What outsiders new to the debate might not know is that Cameron’s decision is the result of years of long-maturing pressure from his euroskeptic party. British Tories, right-leaning by tradition, have been consumed with Europe since the days of Prime Minister Maggie Thatcher. In 1984, she battled the then-European Economic Community bureaucrats over its budget plans, threatening to withhold British payment and eventually negotiating a UK rebate (at the time, most European cash — 80 percent — went to the Common Agricultural Policy, of little help to the farming-impaired UK).

Though her position raised eyebrows, it was hardly surprising. This was the same prime minister who once warned Conservatives to stop “banging on” about Europe. In 1990, the year she was ousted, she warned that a common European currency would “devastate [the] inefficient economies” of poorer member states.

At the same time, I think it’s vital to remember that the fundamental role played by the EU in helping to improve Europe’s global position. The meteoric rise of the BRICS countries — Brazil, Russia, India, China and now South Africa — is by itself a reason to maintain hard-earned European cohesion. Throw it away and Europe as a whole risks falling badly behind those emerging states.

Continental Europeans are of course annoyed by all these new happenings. Talking to friends and family who live abroad, I sense they’re becoming increasingly annoyed with Britain’s constant threat to leave. They resent England using the threat as a bargaining tool, a tactic that Thatcher pioneered.

While Sterling-driving Britain wants free trade, it doesn’t want to be tied to other membership rules and regulations. It would prefer rules tailored to its own needs. Italy and Germany have long filled column inches on the need for Britain to decide once and for all.

Even the Economist, an economically conservative magazine that has long criticized much that of what Brussels does, believes a British exit could have potentially tragic consequences. Whether the Brits choose to acknowledge it or not, EU markets account for half of Britain’s exports. Bilateral trade deals are far harder to negotiate once outside the EU, and the global side of British businesses would likely suffer. And for those looking to get the same “special relationship” deal as non-EU member Switzerland, the Economist wrote, “It wouldn’t: the EU already regrets giving Switzerland the Swiss option, so it is scarcely likely to give bigger, more troublesome Britain the same deal.”

I’ve seen the personal benefits of coming from a EU member state, especially when it came to my university education. As a EU citizen, I paid the same amount as the English did to attend their universities, a sum significantly less than my international non-EU friends. No one can deny that Britain’s universities have benefited from having EU and international students on their campuses. Looking ahead, I wouldn’t want to see my future children — if I have them — denied the chance to enter the Europe-wide university system.

If Cameron wins the 2014 vote, the referendum he’s promised will likely go ahead. So far, neither the center-left Labor Party — which outpolled the Tories in 2012 local elections — nor the socially liberal Liberal Democrat party (in a governing collation with the Conservatives) has embraced anything similar.

For those of us from EU countries who work and live in London, this means playing a waiting game. Will it be forward with difficulty or backward into a dark abyss?