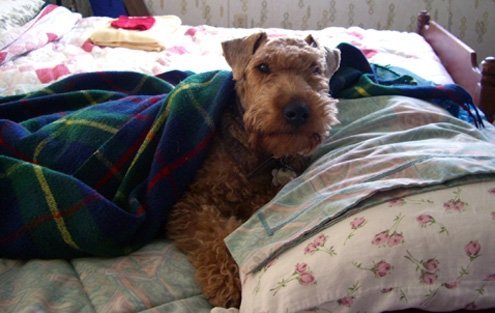 Bailey finally understood the ultimatum.
A

few months before my sister gave birth to my niece Tomato, she sent her Welsh Terrier, Bailey, to boarding school. For nearly four years, Bailey was the center of attention, the baby of the family and a rightfully spoiled pup who never had to share anything with anyone. My sister thoughtfully wanted to ensure that the transition from Party of Three to Baby on Board was smooth and easy.

I’d like to write that when Tomato came home, Bailey was the perfect example of a well-trained dog. He wasn’t. At first, he sulked. Then a rampage of sneak attacks began, especially if my sister or brother-in-law was holding the baby. Bailey was clever. He would nonchalantly lounge around the house, and then discreetly hide behind a door until my sister picked up Tomato. Bailey would literally bum-rush her, sprinting across the room for a quick nip on her rear end and then disappear. My sister would jump up in shock, holding tight to her daughter and look around for the perpetrator. Like the Stealth Bomber, he was out of sight just after the attack. After a few weeks of intermittent attacks, Bailey was given the ultimatum — behave or be somewhere else. He went back to school, but this time, my sister and brother-in-law went with him so that they could learn how to make sure Bailey didn’t feel usurped.

Animals react to a new child (prenatal and post) the same way boyfriends react to your best friend. They become jealous, protective and insecure. Whereas boyfriends usually understand (eventually) that their status isn’t in jeopardy, animals can’t reason similarly. Much like boyfriends, animals react with attitude. There are countless stories of dogs leaving “gifts” by cribs, cats pouncing on babies and animals becoming overly possessive when their owners are pregnant.

Even without a baby, I have already experienced the wrath of a jealous pet. Whenever I lean in to hug, kiss or poke my boyfriend, Bella immediate runs over and begins to bark and jump incessantly, until we stop. And, as I wrote in a prior piece, she famously left a souvenir of her displeasure on an ex-boyfriend’s shoe. To some degree, I expected this from her since I survived a month of stuffed animal poaching and dismembering by Pepper, my first Yorkshire Terrier, after my younger sister was born. My father finally solved the problem by putting Jalapeno sauce on the animals’ tails (Pepper’s grab point). My friend Sabrina recently reminded me of her cat Basil’s need to mark the entire apartment immediately after her boyfriend moved in. The vet prescribed Valium.

Pets need help adjusting to new babies, new homes and new boyfriends, and not always with pharmaceuticals or hot pepper. The best tactic is to help your pets acclimate prior to the change. With pets that have already demonstrated aggressive or possessive behavior, it would be wise to read a training/behavior manual and even take your pet to school, as my sister did. For all pets, even the most complacent, begin the introductions with a BYOB (Bring Your Own Baby) party where your friends can introduce their children to your pet. Here you can gauge your pet’s potential reactions, especially if you hold a baby in your arms around your pet.

Animals rely on their senses, especially with the unfamiliar. Take advantage of these instincts by familiarizing your pet with any baby-associated objects that come to mind. Some future parents and pet owners swaddle doll babies, scent them with baby powder and carry them around the house so pets become used to the presence of a baby. Others download baby cries and play them around the house during the day and evening hours. Always allow your pets to sniff and inspect all baby items, like toys, furniture, clothing, so that they become comfortable.

No matter how many scenarios you’ve both walked through, it is impossible to predict what will happen when Baby and Pet meet. However there are some ways to hedge your bets:

Feed your pet just before the baby is brought home — a full-bellied pet is a happy pet.

Spend time greeting your pet upon arriving home from the hospital. Give lots of loving attention.

Once all is calm, allow your pet to sniff and inspect the baby — on its own time. Don’t force it.

Ironically, I have noted that these same techniques can apply during the Boyfriend/Best Friend Meeting. Except — and write it down — pets have a faster learning curve…