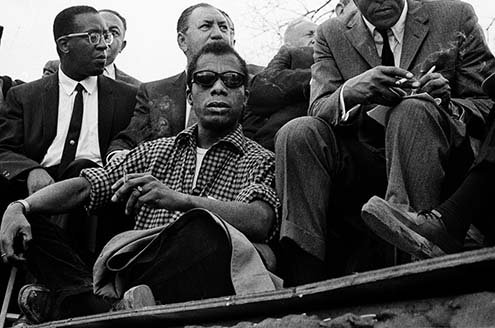 he documentary “I Am Not Your Negro” provides an absorbing reminder of the intelligence, passion, and dignity of 20th-century American novelist and social critic, James Baldwin.

The film is set up as the background to a book Baldwin, who died in 1987, considered writing about three of his contemporaries and friends who were murdered in the long campaign for civil rights for blacks in America: Martin Luther King, Malcolm X and Medgar Evers. In 1979, Baldwin sent 30 pages of notes for such a book — it was never completed — to his literary agent Jay Acton. The film is a reading and elaboration of this document, using a broad range of materials. These include interviews Baldwin gave, especially a 1968 appearance on the Dick Cavett Show, a 1965 Cambridge Union Society debate in which he participated, and a dozen or more film clips that offer perspectives on contemporary America. Words not spoken by Baldwin are seamlessly rendered by actor Samuel L. Jackson.

The film’s strength is in its bringing to life in the 21st century Baldwin’s trenchant criticism, mostly by using his own words and public statements. The film clips, which range from a government film on pursuing black capitalism to Hollywood fare, are often effective. After Baldwin describes black children not realizing they are black until they are six or seven, the filmmaker illustrates this concept with footage from “Imitation of Life” (1959). A black mother arrives at her daughter’s classroom, and only then do the daughter’s classmates and teacher realize that the child, who has been passing for white, is black; and only then do the other children say, “I hate you.” Director Raoul Peck’s juxtaposition of the white goddess Doris Day, pining for her man in “The Pajama Game” (1957), with historical photographs of a lynched black man, on the other hand, is questionable. The comparison plays with the viewer’s emotions while doing little to advance understanding of black-white relations. Black and white Americans alike would find this Doris Day imagery not anyone’s reality. Lynchings peaked in the U.S. in 1892.

The historical jumble presented by the film can interfere with its story. Peck at times ignores chronology, interposes contemporary events, and leaves out significant context. This approach dissolves the distance between the present and the past and asserts that nothing has changed. Peck introduces contemporary events, such as the police use of force in Ferguson, Missouri, with Baldwin commentary from almost 40 years earlier. He quotes Baldwin’s discussion of Birmingham, Alabama, without telling the audience — most of whom would not know — that four young girls were killed in 1963 in a church bombing there.

Baldwin says: “History is not the past. History is the present.” Yet one wishes in Peck’s telling for a sense of an historical arc to Baldwin’s thinking.

These critiques are not ones the director, a Haitian political activist, likely would heed. This isn’t so much sloppy filmmaking as intentional use of these techniques for their emotional intensity. “I Am Not Your Negro,” released by a French production company, is less an inquiry than a polemic.

Even so, the documentary arrives at a watershed moment, after eight years of the Obama Presidency and the election of Donald Trump. We see Bobby Kennedy, in a speech defending the progress of civil rights, state that a black person could be president in, perhaps, 40 years. Most white people would think, “yes, and it came to pass.” But we are chastened by Baldwin’s angry response; to paraphrase: “we’ve been here 400 years and now we have to wait 40 more.”

Polemics are the order of the day. Along with Jordan Peele’s “Get Out” and Ta-Nehisi Coates’s “Between the World and Me,” Peck’s film offers a stern rejoinder to those who believe Americans have achieved a post-racial society. From that perspective, Baldwin’s words are as meaningful now as they were when he spoke them. Yet for all its focus and undeniable power, “I Am Not Your Negro” makes one yearn for other voices and other arguments — ones more measured, more nuanced, and more aware of the complexities of the recent past.

I Am Not Your Negro ★★★ 1/2 Directed by Raoul Peck. With James A. Baldwin (as himself) and Samuel L. Jackson (reading).