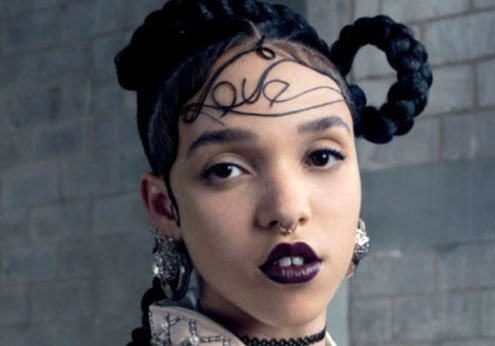 ahliah Barnett may not ring a bell. Though the London-based artist better known as FKA twigs has been building a discography and fan base for the better part of three years, she comes to listeners from a decidedly unexpected place, both visually and musically. Born to a Jamaican father and English-Spanish mother, her ethnicity and sense of style is difficult to pin down. That’s also true of her songs, which are best described as a highly evolved strain of R&B.

With the release of LP1 (Young Turks), Barnett has finally made a hard-earned musical splash. She got her start working night shifts at burlesque shows and later as a video backup dancer for such acts as Kylie Minogue, Taio Cruz and Jessie J. She’s been making music since age 17. She also meticulously constructed a persona from the ground up. It’s no surprise that her work would culminate in a 10-track album of this caliber.

And LP1 this is an accomplished feat of post-millennial musicality. Its influences run the gamut from Aaliyah to Aphex Twin. Producers including Arca, inc., Paul Epworth, Clams Casino, and others lend a restrained sound palette that she complements with her vocal command. Listen to the clenched-jawed tension on “Two Weeks,” the gentle pulchritude of “Hours,” or the display of range on “Numbers.” Her lyrics are deeply personal without ever really feeling like they come straight from her diary, a distance maintained despite the breathy immediacy of her delivery.

In many ways, she’s occupying the same space that Björk occupied around the 2001’s Vespertine. What separates them is how Vespertine opened a window into Björk’s inner monologue, a deep exploration of her thoughts and feelings; LP1, on the other hand, feels like a starting point for such a journey.

That’s evident on choir-like “Closer” toward the end of the album. “I’m here to be closer to you,” she sings. And on “Give Up,” she offers, “I wish that you would know that I’m here to stay.” If that suggests she’s already exhausted the depths of her emotional reserves, she hasn’t. Not yet.

If FKA twigs is coming into her own, Tampa, Florida’s Merchandise is outward bound. The band, led by perpetually-tortured crooner Carson Cox, has undergone a handful of lineup tweaks and a continual, gradual refinement of its sound since its 2008 formation. With After the End (4AD), the group finally landed a big label for what should’ve been a big release.

Sadly, the result disappoints. Since 2012 standout Children of Desire, the band has seen diminishing returns on a familiar pastiche of 80s indie-and-goth rock. Even signing with the legendary 4AD label and tapping Gareth Jones, a veteran producer whose resume includes Depeche Mode, Wire and Nick Cave, hasn’t helped. Though After the End sounds better than any of Merchandise’s previous records, it falls short of actually being good.

Fans of Echo & the Bunnymen or The Church may love it on occasion, for the deep balladeering on the jaunty, propulsive “Enemy”; for the singular woodblock sound livening up “Green Lady”; for the strumming outro of “Exile and Ego.” Based on those tracks, it’s a perfectly assembled ode to another era.

But that changes nothing. After the End sounds flimsy and betrays its better predecessors. For a record that Cox says “exploded [the band’s] reality,” there’s too much that’s conservative and uninteresting. It sounds like a band playing to satisfy the descriptions of others. That may be the result of coming to believe press that lazily compares them to The Smiths.

Whatever the case, this is a painfully dull listening experience. Though Merchandise has transcended Tampa’s punk and hardcore scene, it’s hard to imagine new fans jumping on board unless the band can return to the song-craft that led it to break out in the first place. After the End may not be the end. We’re not quite there. Not yet, anyway.