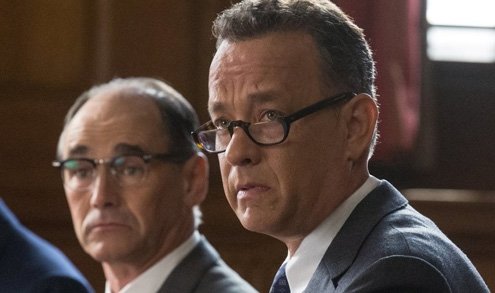 arely does one film feel like the sum of two “authors,” but that’s very much the case in Steven Spielberg’s Cold War thriller “Bridge of Spies,” which handsomely fictionalizes the life of New York insurance attorney and former Nuremberg prosecutor James Britt Donovan, a man who found himself thrust into the world of intrigue when Soviet spy Rudolf Abel, posing as a painter in Brooklyn, was arrested in 1957.

Though Spielberg’s paw-print is everywhere on a story about an everyman attorney Donovan (Tom Hanks, who else) made to stand on principle, it’s the writing of screenplay coauthors Joel and Ethan Coen that dominates the first half of a movie that’s as Frank Capra-like as they come in an otherwise postmodernist 21st-century.

When family man Donovan is plucked from his New York firm to represent Abel it’s all about pretending the spy gets at least the appearance of American due process. But Hanks, like Henry Fonda and Jimmy Stewart before him, is asked to play the role of a scrupulous man averse to winking and deceit, and he knows the moves by heart. When told by a CIA boss “We don’t have a rulebook here,” he begs to differ, seeing legal rights and patriotism as part and parcel of the only rulebook that matters, the Constitution. This one-hour introductory segment is majestically uplifting Americana, with Spielberg using the plucky demeanor of his favorite actor to full effect. But he has help in the form of Mark Rylance’s magnificent, Coen-driven incarnation of Abel — a deadpan, laconic, placidly intelligent man who when asked why he’s not worried invariably replies, “Would it help?” The Hanks-Rylance combination in the context of the rotary-dial, Red-bating, nuclear menace era is as good as it gets.

As this poised first hour unfolds, it’s unthinkable that much could go wrong. But it does. Spielberg’s ambitions extend well beyond Abel’s arrest, conviction and imprisonment. Donovan’s involvement in the case led him to a vital role in negotiating the release of U-2 pilot Francis Gary Powers, shot down over the Soviet Union in 1960, and U.S. student Frederick Pryor, arrested and held in East Berlin in 1962, with Abel central to each exchange. It is the film’s pushing of Donovan to Berlin to retrace these embroidered footsteps that proves a bridge too far.

Removed from its Frank Capra settings — stalwart but pilloried American man vs. skewed American institutions — the film muddles awkwardly into near-comic espionage territory. As the tableau expands, the human effect thins out. Drawn into the necessary subplots of Powers’ shoot-down and Pryor’s misadventure, Speilberg is forced to compress and hurry up. His take on Soviet and East German middlemen turns heavy-handed and eventually caricature laden. You expect at any moment to see Donovan cringe as guards mow down people trying to cross the newly built Berlin Wall, and lo and behold it happens.

So it is that the substantive limb, Donovan and Abel, trial, conviction and appeal, is sacrificed to the need for bombed out East Berlin backdrops and a cavalcade of suits and uniforms around a sinister wall. Compared to what came before, this is elegant but overwrought gruel.

It’s too bad, really, all the more so when Donovan and Rylance re-enter the picture as part of a moving Glienicke Bridge climax. At that moment know what you’ve been missing. Rarely does an actor who has 20 minutes of screen time define a film as memorably as Rylance defines “Bridge,” but this is one of those times.

No doubt had the Coens been in charge they would have kept the focus on the American side of the story, level headed attorney and wry Russian spy, leaving its more Le Carré bits to play backup. Not Speilberg, who as always feels the need distinguish between the few moral people against many less moral ones, and to demonstrate Donovan’s resolve even when thrust into the confusingly absurd “carnival” that characterized Cold War parry and thrust.

“Bridge of Spies” locks in all the trademark Speilberg themes, with family values — Donovan’s conventional but noble marriage — front and center. It also jabs lightly at U.S. governmental duplicity and hypocrisy. Hanks shines (when does he not?) and all the lesser players are convincingly true to very male and very middle aged Saks Fifth Avenue 1950s. But Abel as conjured up by Ryalnce is stroke of small genius, and it’s a pity when he recedes into prison, opening the door to the Powers and Pryor story, and later to Berlin, an exercise best left in the once-upon-a-time hands of Richard Burton, who covered all that needed covering in “The Spy Who Came In From the Cold.”