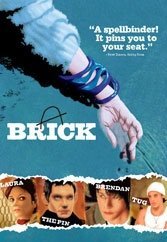 Tipping its hat to film noir and Shakespeare, 2005’s “Brick” is an intelligent teen drama better suited to adults. Emerging auteur Rian Johnson wrote and directed this pitch-perfect detective story about a young man’s determination to find truth in a suburban California high school weighed down by drugs, violence and teen glamour.

Brendan (Joseph Gordon-Levitt in his strongest performance to date) doesn’t belong to the in-crowd. His girlfriend Emily (Emilie de Ravin) leaves him for the seductive, heroin-laced world of teenage socialites, but one day tearfully calls him asking to meet. Their rendezvous is as cryptic as the phone call. The next day Brendan finds her body face down in a storm drain.

What follows is a hardboiled detective story in the vein of Raymond Chandler and Dashiell Hammett. Determined to find Emily’s murderer, Brendan soon finds himself entangled with fashionable but cloying Laura (Nora Zehetner), pale-faced drug lord named “The Pin” (Lukas Haas) and his brutish bouncer Tug (Noah Fleiss). Brendan never gets clear answers, but the intrigue is denser than the brick of heroin the film is named after.

Director Johnson won the Special Jury Prize for Originality of Vision at the Sundance Film Festival, and here’s why: he’s a modern day Shakespeare who innovates with language until the dialect fits the characters. Lines such as, “I’ve got knives in my eyes, I’m going home sick” and “They’d flash their dusty standards at the wide-eyes and probably find some yegg to pin” aren’t true to how high school students speak. But it’s the way they speak in Johnson’s world, and it works.