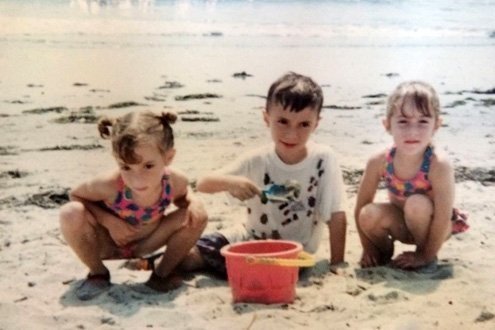 Once upon a time, the author, right, on the beach.
O

ne of the saddest parts of adulthood is watching summer breaks disappear. Gone is the delicious, jittery anticipation of the last day of school and eating bowls of Ben & Jerry’s ice cream with names that sailed over my eight-year old head (I’ll have two scoops of the Karamel Sutra, please. With hot fudge and sprinkles).

My family rented a summerhouse that couldn’t be built today. It was too close to the rim of the Atlantic. In the event of a bad storm we were told just to leave, something we did one summer, our pet turtle and her terrarium packed up in the back seat.

I spent most days collecting periwinkles from the sides of rocks that towered over me. I gave them names I thought sounded elegant, like Greta and Fabiana. I’d play with the owner’s daughter, Inga, who was a few years older than me and lived in the floor below us. She was half New York-Jewish, half Swedish, or so she said. We’d eat watermelon jell-o for breakfast and she’d discuss boys in her class she liked. I listened politely. My freckles bloomed across the bridge of my nose, and I wore the same pair of denim shorts all month because they felt cozy, even hiding them underneath my pillow so my mother couldn’t find and wash them.

My sister and I shared a room with a king-sized bed and dark wooden dressers. I can still hear the disgruntled squeak they made when I opened them. I carved my initials into the inside panel of the drawers, and ran my fingers over the imprint every summer.

One August, my two siblings and I gathered mussels at low tide, planning a feast of spaghetti con le cozze, or so I’d call the dish now. Our dinner was delicious, probably savored in the knowledge we’d tapped into innate hunter-gatherer instincts. Years later — I was in my 20s — my mother admitted she’d discarded our foraged mussels and swapped them with store-bought ones from the local supermarket. “Don’t tell your brother, he’ll be so disappointed, even after all this time!” she begged.

A retired jeweler named Jerry lived in the house next door. He’d always be sunning on his deck dressed only his bathing suit. I didn’t recognize him when I ran into him at the local pharmacy with his shirt on. He was divorced but not officially, and spent his days reading and sneaking stale marshmallows from his cabinet that he’d give to our cocker spaniels. One summer we arrived and learned he had died peacefully in hammock overlooking the ocean. I was sad, but figured he’d chosen the best way to go.

We went to the beach house for 15 years straight, throughout my time in high school and college, and even as recently as two years ago, when I’d sleep off the Italian jetlag in the same bed I’d dozed in as a child. Inga’s dad eventually sold the house, and after that a couple from Connecticut bought it. But things were never the same. They let us bring our dogs with us, but charged us $200 per beagle. They also stopped by every other day to water their hydrangeas. The final straw came when the husband called up drunk on St. Patrick’s day, complaining that my dad had let our dogs shed all over his property. The next year they didn’t call about the rental, a call we’d gotten every June since I was six. My parents didn’t call them either.

These days, my summers are spent mostly in Rome, far from my childhood. I’m awake by 7 a.m. and I’m never outside long enough for my freckles to brighten. Italy has no love for air conditioning, and there are no ocean breezes. When I feel particularly overheated, I lift up my hair and stick my neck into the stream of air pushing out from the office fan – to the horror of my colleagues (that’s dangerous, stop! You’ll get sick!).

But when I go home to the U.S. I still make it a point to drive by the beach house. I wonder if my initials are still scratched inside the wooden drawers, the faint “A” of my youth. And then I drive on.