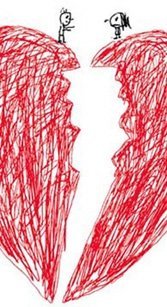 How's Vittorio? Was he happy to see you?
I

In the case of the break-up, depending on the severity of the final exchange and how many years the couple had invested in the relationship, great care was taken in listening and comforting the new single. A nodding chorus of encouragement along with several rounds of drinks would help keep the wounded soul on a forward march.

Advice and tactics varied from “It just wasn’t right” to “Think of what’s to come,” and “Don’t worry, he’ll be fine” to “Now you can finally sleep with that deejay!”

Whatever the advice, the door to yesterday was closed for the better (except for hot-sex rebounds).

Rome on the other hand struggles with the concept of moving on. Chalk it up to a reverence for things past.

— A well-meaning chorus of friends.

After tears and countless conversations, pro and con lists and a lot of Prosecco, Carrie felt ready to end her yearlong relationship with wonderful Vittorio. He just wasn’t the guy, or at least at this point in her life it felt wrong.

She did it after an argument that had bled into a long talk, during which she’d hinted at insecurities about her own future, and perhaps theirs. She hoped he’d catch on and make it easier. She wanted him to magically to let her go, no hurt done.

Instead, he said: “Carrie, do you need to be alone for a while, just to sort things out?”

Was that it? Was that alone for a while an invitation to the exit?

“Ok, I’ll call you later.” Vittorio pulled her toward his chest and hugged her tight. Carrie turned her face toward the floor. He kissed the hairline above her ear. She cringed with guilt over feeling so loved. The tears came fast.

“I’m going to write you a letter,” she whimpered, and buried her face in his chest.

When she did, the words spilled out in a cathartic cascade, tears spotting the black keyboard. She wrote and cried until the tears dried up. She reread for clarity, ran spell check, and pressed “send.”

It was done. She called for re-enforcements in the States. Her dry sobs were met with reassurance. She felt the firmness of logic over love and even managed to laugh when a friend reminded her about a deejay with whom she’d nearly cheated. Did she still have his number or his email?

One week later she returned to her dance class after the summer break, where she would no doubt have to fill in her Rome girlfriends on the events of the summer.

She met Alessandra in the changing room first. They exchanged the usual “How was it?” and “Where did you go?” and then can came the question:

“How’s Vittorio? Was he happy to see you?”

Carrie’s mother may has well have been ripped apart by wolves for the look of sheer horror on her face.

“Well, actually I thought a lot about it and I think it was for the best.” The words didn’t come easily. In fact, they felt like lies.

Alessandra’s face remained drawn and deeply saddened as she pulled on her leg warmers. Cristiana and Lucia entered together giggling. They raced to embrace Carrie and their first question cut like a butter knife to the eye.

“I’ll bet Vittorio was extra excited to see you..!” Winks and jabs to Carrie’s belly followed.

She repeated the somber message and prepared herself for their response.

“Maybe you just need some time to think!”

“But you were so good together!”

In the past week she’d felt lighter and freer if sad sometimes. She was working hard and catching up with old friends. Including a certain Deejay… She didn’t feel lonely. At least not yet.

She watched their faces crumpled in sympathy, and as she reassured them that she was indeed happy, that she was dedicating more time to herself and her goals, but the words seemed flimsy and empty. Doubt simmered inside.

“You never know,” began Alessandra, “Maybe in a few months..?”

Carrie danced hard that night. She tried to sweat her thoughts into some comprehensible order. After class she turned on her phone to find an SMS from her college roommate: