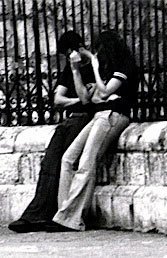 Ex-boyfriends and girlfriends have been known to demand (and take) custody of shared animals to spite their former significant other.
T

he other day, my friend — I’ll call her Jill — casually mentioned that she was separating from Ben — Ben’s his real name — after eight years as a couple. She wasn’t upset and neither was he. Everything would be split evenly. The only nitpicky detail was custody of their golden retriever Cody. Where would he end up? Jill happily informed me that in an effort to avoid separation anxiety for all three, Cody was being bi-parented — as only New Yorkers do. He gets mornings; she gets afternoons. They alternate evenings, and split weekends and vacations. Since New Yorkers are used to navigating up and down the city easily at all hours, the solution seemed simple.

They are living in a fantasy world, I thought. As a proud former Los Angelena, I find the idea of sharing and traveling outrageous. After all, who would really drive across town to drop off her dog with an ex? And whose dog was he anyway? When I broke up with Binky (yes, he’s real), he demanded custody of my dog Bella, insisting that she belonged to him because he took care of her more. He was an out-of-work actor, after all. He had a lot of free time.

I showed him the adoption papers with my name, muttering something about moving to Rome with no friends, and how I was not going to part with my dog. Name-calling and finger-pointing followed, and I left with Bella.

A few months later, we played the “getting back together” game and met on neutral ground in Colorado, with Bella of course. We realized resuming our relationship was a bad idea but still had a 12-hour drive back to Los Angeles, perhaps the longest non-stop break-up talk in history. The entire dialogue was about Bella and why she wasn’t going to live in Los Angeles. Again, I won. Bella still sends him postcards.

Breaking up is hard to do. Especially with pets.

If you bring an animal into a relationship, there is a money-back guarantee that your pet leaves with you, no questions asked. However, when you decide to acquire an animal — as in “love from the both of us” — and raise him/her together and then break up, the decision over ownership of the pet can be vicious.

Not everyone wants to participate in joint custody — the thought of Bella walking with Binky (or any former boyfriend) and a new girl disgusted me — and most people don’t play fair when it comes to breakups. Ex-boyfriends and girlfriends have been known to demand (and take) custody of shared animals to spite their former significant other. Receipts of money spent on food, vet bills, and clothing seem to weigh more than who truly takes care of and loves the animal, and who the animal is more attached to.

When Party of Three splits, pets are often the innocent victims, just like children. However, in court disputes (for separations and divorces) animals are often considered as chattel or a thing, to be divided like the car or the house. Recently, there has been a increase in pet custody rights and laws as more and more owners fight for their pets — not as objects, but as valued family members. Custody laws have begun adjusting to the emotional well being of the animal. Legal settlements, meanwhile, still define ownership based on responsibility and attachment, along with visitation rights.

Fine, you’re laughing. But what if the only way you could see your beloved Fido or Fluffy was to ask your hated ex? What if you couldn’t see your beloved pet at all? Some family and pet law online sites suggest going so far as including pets in pre-nuptial agreements, or even writing out a pet-specific prenuptial document.

Okay, I grant you all this is a little out of hand and has absolutely no bearing on the single man or woman. So what does it mean?

This: If you choose to buy or adopt an animal with your boyfriend or girlfriend, give your pet as much love as possible from the start. That way, you can confidently say, “he loves me best” when you both storm out the door.

Or do a prenup. Can’t hurt.