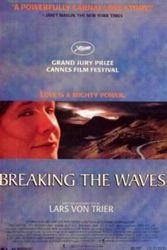 Danish director Lars Trier (the “von” is a cutesy addition) has a ponderous, annoying side that confounds his genius. The Catholic-turned son of nudist Communists (for real), he spawns movements (“Dogme 95,” the hand-held camera crowd) and embraces phobias: He won’t fly. His ambitious “Dancer in the Dark” and “Dogville” bogged down because of length and quirky attention to Björk and Nicole Kidman, respectively. All this needs saying to account for “Breaking the Waves” — which operates in its own dimension. That’s because Emily Watson’s performance as Bess McNeill, the diffident wife of a paralyzed oil rig worker, is among the handful of major acting accomplishments since World War II. The movie is about faith, hypocrisy and blind love, and resuscitates Procol Harum’s stunning “Whiter Shade of Pale.” But Watson transcends plots, or becomes it, and puts in a turn of faith that can only be compared to a Sylvia Plath poem.