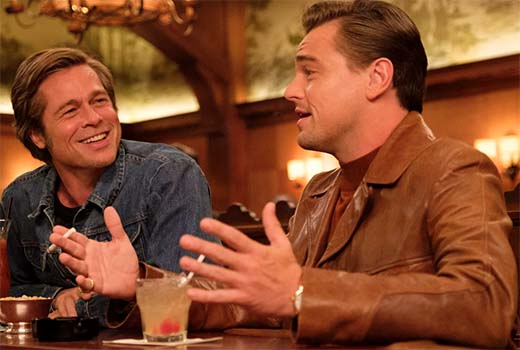 irector Quentin Tarantino, the ultimate rule-breaker, is at it again in “Once Upon a Time … in Hollywood.”

A kinder, gentler Tarantino? Yes and no. The film’s central arc — set 50 years ago — features two mellow buddies as they cruise around Los Angeles, leaving the bad-boy director to push most of his signature vengeance and violence to the end.

The two men are wannabe TV and movie actor Rick Dalton (Leonardo DiCaprio) and his stunt double, Cliff Booth (Brad Pitt). DiCaprio and Pitt together are superb, with the latter surprisingly willing to play second-fiddle (or so it seems) to DiCaprio.

Good as all this male bonding is, it’s secondary to the film’s key themes. One is the built-in anxiety of the B-movie actor, or of anyone who senses their career may be heading south (does that include Tarantino?). Another is the role of the Charles Manson murders in the American psyche. Stitching these two ideas together is another demonstration of Tarantino’s talent.

“Once Upon a Time …” opens on a square black and white screen A reporter is seen interviewing Dalton (and, as an afterthought, Booth), on the set of his TV series, “Bounty Killer.”

The scene establishes the dominance of the actor and the secondary role of his employee, stunt-man and gopher.

The Charles Manson-led murders of Sharon Tate and four others are woven into the film’s plot.

The screen then switches to color and expands to today’s widescreen standard, with a focus so tight that one can’t tell – until the camera zooms out – that what’s in view is an enormous painting of Dalton on a cement wall in the driveway of his Hollywood Hills home. Though the date on the screen is January 1969, Tarantino deftly blends 1960s TV techniques with 2019 hyper-focus. The result distorts time – are we in the old era or the new?

More rule-breaking follows. Tarantino repeatedly employs voice-overs: at times with Dalton, at others with Booth, sometimes turning to an anonymous voice. Not only is the narrator unreliable; there is no consistent narrator. As if to toy with the audience, and with concepts of realism, Tarantino uses a variety of cinematic tricks: film-within-a-film, cross-cutting, brief flash-backs, cartoon-like brawls, choppy time-lapse photography and even a black-and-white cigarette commercial alongside the end credits. At the same time, the film is in part “based on a true story” – the Manson murders, of course. We’re let into that open secret early on when Dalton recognizes Sharon Tate (Margot Robbie) and Roman Polanski (Rafal Zawierucha) in the driveway beside his Cielo Drive home. Manson and his “family” murdered Tate and four others in a luxury home on that street in August 1969.

The stories of the two buddies and the Manson victims-to-be appear to intersect when Booth climbs onto Dalton’s roof to fix the TV antenna, takes off his shirt (Pitt’s 55-year-old body still looks good), opens a beer and calls out to starlet Tate, though we don’t see her in this scene. It’s one of Tarantino’s numerous misdirections — the biggest saved for the end. (And don’t miss the “Mean Dog” dog food, one of the many “plants” in the film.)

Besides the TV-show-within-a-film, there is a film-within-a-film, where Dalton (looking a lot like Burt Reynolds) is challenged to be an actor by a precocious child actress. DiCaprio shows his own acting chops here as he plays the emotionally fragile Dalton, acting both badly and well.

The heart of the film’s plot is cross-cutting between Dalton in his film-within-a-film; Tate in the audience of a Westwood theater, watching herself in “The Wrecking Ball,” with Dean Martin; and Booth’s surreal experience at the Spahn Ranch where the Manson cult figures are chillingly portrayed (Margaret Qualley, Lena Dunham and Dakota Fanning play three of the “Manson girls”) – and watch for Bruce Dern as ranch owner George Spahn.

It takes time for this intersection to develop, but when it zeros in on August 8, the result is powerful.