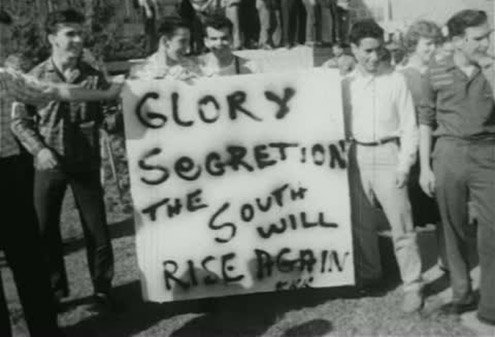 Once blatant at all levels in the American South, racism has in many cases gone "underground," incorporated into a linguistic code.
T

he city ain’t what it used to be. These are the words of the one-armed white man who stands before me in a New Orleans gallery, giving me his two cents after hearing I moved to the city in January.

We’re in the South, so I intuitively know that everything this man is articulating is in a carefully crafted, linguistic code.

A baseball cap holds down his white hair, but the intensity of his blue eyes remains unobstructed as he lectures me on the cause behind New Orleans’ deterioration: “I used to think it was education that was the problem. If we can provide a good education, then everything can be fixed. But now I see what’s actually happening: it’s the families. They don’t care.”

He’s talking about challenging students in the public school system, and there’s little equivocation about the skin color stereotypically associated with the issue. It’s like when I would be thanked by strangers for working in public schools in Mississippi: “We’re so grateful you’re here to help us fix this problem.”

I decided break the code.

“To be clear,” I said, “when you say ‘families,’ do you mean black families? Are they the problem you’re identifying?”

“Now look,” he confessed, “I know I sound like a racist. But you don’t know that I was the first landlord in Louisiana to integrate residential projects.”

I decide to set aside the fact that, while he’s criticizing African-American families, he’s also just admitted to profiting from them, and, specifically, their poverty.

“Okay, but just let me make sure I understand what you’re saying,” I tentatively intervened, “What I hear you saying is that the majority of African-Americans in New Orleans don’t care if their children succeed at school. Right?”

“Now, listen,” he continued, “I’m saying that I see them laying around getting nothing done. Come with me to my projects sometime, and I’ll show you. They don’t want to do anything. They don’t want to show up at the school to support their kids, either. There ain’t nothing anyone can tell me about blacks I don’t already know.”

Two aspects of this conversation are common not only to the American South, but the national political landscape: the first is the semi-codified avoidance of blatant racism; the second is stating the “knowability” of another culture based on an individual’s experience.

In his capstone speech at the Republican National Convention, Republican presidential nominee Donald Trump worked in both of these elements, while promising to “present the facts plainly and honestly.”

Trump’s first facts were about crime, and he chose to focus specifically on Chicago: “In the president’s hometown of Chicago, more than 2,000 have been the victims of shootings this year alone. And more than 3,600 have been killed in the Chicago area since he took office.”

What Trump doesn’t mention plainly — because he’s speaking in the code — is that we all will interpret crime in Chicago as being an African-American issue. In fact, 55 of the 80 identified shooters in Chicago this year were black. Trump won’t say this explicitly, however. In this case, he’s not lying, but the association he’s asking voters to make is clear: our president is black, and his hometown is filled with black crime. Coincidence? It’s time for a change.

The danger of the code, of course, is that there’s no way of addressing it. For a candidate that professes directness, Trump knows when to thinly cover his tracks in order to make a point without eliciting accusations of prejudice. Perhaps he’s learned some tact since labeling Mexican immigrants as rapists.

He made a similarly implicit logical leap later in his speech when declared war on immigration based on a “border-crosser” killing a 21-year-old “girl” named Sarah Root in Nebraska. Trump failed to mention, of course, that Eswing Mejia killed Root in a drunk driving accident, and not with intent to murder (though he had a prior criminal record). Trump also failed to mention that white people in the same age group as Mejia are twice as likely to drink and drive than any other racial group. Again, a single instance of criminal misconduct — however grave and unforgivable — is transformed into the “knowability” of an entire group of people. Trump has continued down this road in his rage-filled campaign.

In America, this form of speech and of illogical generalization has caused insurmountable rifts between races, sustaining what author Michelle Alexander has termed “The New Jim Crow” of bias-fueled institutional, unspoken racism. More men of color are behind bars than ever before, and for crimes that white men commit at the same or higher rates. White leaders operate on a presumption of guilt when around other races, but remain cautious enough to avoid saying so blatantly. Political correctness is no longer in vogue, but admittance of racial bias hasn’t come into the picture yet, either.

The plain and honest truth is that if you live in certain typically low-income African-American neighborhoods in New Orleans, you may be as much as 3.5 miles away from the closest grocery store that provides fresh vegetables. Car Insurance in Louisiana is the most expensive of any state. Only two bus routes run through the Lower-Ninth Ward, and at 45-minute intervals. Because of the charter school system, your child may not attend a school in your neighborhood, requiring you to travel across town. This is, of course, if you’ve already found time to travel to get groceries and have the flexibility in your job-schedule to actually go to visit your child’s school, not to mention wages enough to spare the price of a couple bus tickets.

When we mystify our language about race, we further detach ourselves from the humanity of others. Not only are we giving into deeming other cultures predisposed to certain things and therefore reprehensible, but we’re also refusing to engage in genuine conversation. Civil discourse erodes when we don’t speak what we mean, and blame others for putting words in our mouth when our biases are uncovered.

“I won’t let you criticize / my city like my skin, it’s so pretty / if you don’t like it, just leave it alone,” sings Chicago-born singer Jamila Woods on her tribute to her hometown, “LSD.” Increasingly, the problems in our cities are being associated with racial divides, and to attack one is to covertly attack the other. Fed up, Woods would rather be isolated from the conversation then continue to hear it.