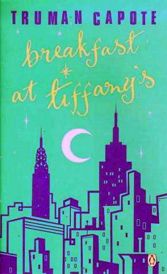 Immortalized by the exquisite Audrey Hepburn in the film version of the book, Holly Golightly and her dubious escapades are firmly entrenched in the collective American imagination, at least in the imagination of those of a certain age. Marilyn Monroe would have been a far truer casting choice, however, a woman, like Holly of the book, who used her looks and dumb-as-a-fox charm to get as far from the the boondocks from whence she sprang and to move up, up, up in and then, well, out, of the world. The story of Holly is told by her Manhattan apartment neighbor — a young, undiscovered writer who’s a stand-in for Capote.

Some of the passages are Capote at his descriptive best: “He was a middle-aged child that had never shed its baby fat, though some gifted tailor had almost succeeded in camouflaging his plump and spankable bottom. There wasn’t a suspicion of bone in his body; his face, a zero filled with pretty miniature features, had an unused, a virginal quality; it was as if he’d been born, then expanded, his skin remaining unlined as a blown-up balloon, and his mouth, though ready for squalls and tantrums, a spoiled sweet puckering.” While worth the quick read it requires, the book itself is as lasting and substantial as a blown-up balloon. Once the last page is read, it goes pop and is gone.