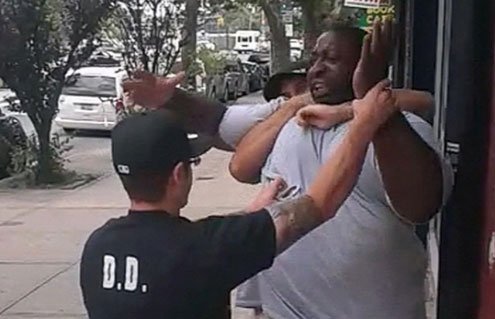 ver the years, Italian police and soccer ultras — Italy’s organized hooligans — have repeatedly faced off inside and outside major stadiums. In Rome and Milan, riot police and carabinieri have quelled skirmishes between rival fans or been pitted against bandana-covered agitators pelting them with objects. Similarly tense situations have arisen during political demonstrations in which the line between civil disobedience and violence often blurs. Rome has long attracted violent demonstrations, and the smell of teargas is nothing new.

What’s notable, however, is how rarely guns have been drawn, let alone discharged. Over the decades, both police and protestors have learned to read each other’s moves, even in mob situations.

Police brutality is no stranger to Italy. In July 2001, Special Forces units raided demonstrators at the G8 Summit in Genoa. The clashes left one dead and hundreds injured. In 2005, in Ferrara, 18-year-old student Federico Aldrovandi died of injuries received during his arrest. More recently, human rights groups have denounced police raids on gypsy camps located outside several large Italian cities.

However deplorable, these incidents — minus the Genoa clashes — lacked gunplay. As I’ve written before, Italian gun ownership laws are extremely strict. Italian police know ahead of time that being shot at is a highly improbable prospect.

Contrast the Italian reality to the United States, a society where guns are ubiquitous — particularly in cities — with their use posing a growing threat to both the social order and to police.

It’s an ominous situation. Consider the two Brooklyn policemen gunned down on the heels of controversy surrounding the July death of Eric Garner, the Staten Island man whose choking death was captured on videotape that was recently made public.

What links the two incidents is that the Brooklyn officers, seated in a patrol car, and Garner, approached by officers on a Staten Island street, posed no immediate threat. An ex-convict who had vowed revenge against police fired on the Brooklyn officers at point-blank range and later killed himself.

The 43-year-old Garner, a large man, wasn’t violent when first approached. The video footage showed him on the ground in a police chokehold while gasping the words “I can’t breathe.” Headlocks or chokeholds violate New York police policy. According to witnesses, police had approached Garner (suspected of selling contraband cigarettes) after he’d broken up a neighborhood fight. The situation escalated when Garner berated police for singling him out.

The Fourth Amendment of the Constitution entitles U.S. citizens to be free from unreasonable searches and seizures. The Supreme Court has held that “reasonable force” — from a police perspective — should be the measure of what is constitutionally accepted when confronting a suspect. Police may use as much force as is reasonably required to overcome resistance.

What is legally “reasonable” does not depend on police motivation or on what might later emerge about the genesis of an incident. Instead, it is an objective measure applied to facts and circumstances confronted by an officer or officers at the time of a confrontation or arrest.

These particulars are essential. Deadly force can sometimes qualify as acceptable, but only when an officer believes a suspect poses a threat of serious bodily harm to himself or to others. Deadly force can’t be used, for example, to capture someone fleeing a scene unless the suspect has already threatened the officer, or the officer has probable cause to believe the suspect has committed a crime that has caused, or threatens to cause, serious physical harm.

Under the microscope of objectivity, the handling of the Garner arrest fails the “reasonable force” test. The video showed no resistance on Garner’s part. Nor did he pose an imminent threat. There was no moment of super-charged intensity — a confrontational trigger — that could be seen as demanding of a violent response. When police tried handcuffing Garner from behind, his response was, “Please don’t touch me.” Police then tried subduing him, leading to the lethal aggression. Notwithstanding the video evidence, a grand jury chose not to indict the arresting officers.

That flawed and controversial decision shows a breakdown between laws as they exist and laws in the way they’re applied. It also radiates cultural menace.

The U.S. has a massive class of undereducated and under-trained police. Some have racist inclinations. Combine weak education with poor judgment and the result can be a toxic irrationality that dispenses with reason and puts citizens in harm’s way.

In Italy, police and carabinieri are encouraged to use “good judgment,” though most are not trained in how to exercise it. Fortunately, guns play almost no role in routine Italian law enforcement. In the U.S., educated good judgment is just as difficult to find, but with a serious difference: guns are abundant, and violence is often the norm.

“What happens when an unstoppable force meets an immovable object?” That’s called the irresistible force paradox. Slowly, painfully and troublingly, law is being thrust into just such a position.