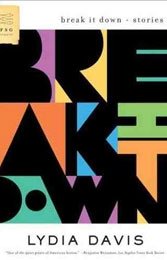 Lydia Davis’s stories — there are 34 early ones in this volume — display the wizardry of a writer who can turn hot air into cold thanks to her claustrophobic mastery of the present tense. More than any living American short-form writer, Davis is uncannily able to portray gradations of feeling not in retrospect but as they’re occurring, privy to the ambiguous emotional complications of her own making. Her control of the tense hinges on simple, declarative sentences whose terseness acquires poignancy.

Only Davis can suggestively begin stories, “Everyone has a mother somewhere” or “She looked forward to being an old woman and wearing strange clothes” and satisfy the premises on which such teases depend. Or make the simple ominous: “One evening she watches one face in a movie for two hours and feels that her own face has changed.”

Though most of her characters are lonely — many are self-conscious divorcees — their petit mal afflictions give them greater rather than lesser substance. Characters are the sum of their tiny spasms of insight. Mr. Burdoff goes to Cologne to learn German but falls for a married Norwegian woman named Helen who when she later thinks of him will recall “earlier lovers, and their cars.” Not their scent, mind you, their cars (Davis crumbles the sentimental). A woman who reads a poem about a mouse finds a dead one in a trap. Does she think of the poem? No. She worries about how to discard it, since the ground outside is frozen. “Fat intellectual” Wassily sees himself as his “own unwanted guest,” until his brother dies, after which he wallows in self-pity and goes to bed with sandwiches. A woman with time on her hands is sure the city government has hired “old black women” to call wrong numbers and ask for Lisa: “Others — mainly old people — have been employed to amuse us by wearing strange hats.”

“Always start learning your foreign languages with the names of farm animals,” says the narrator of “French Lesson: I” in what would seem like an instructive ditty about the animaux on la ferme. The next lesson, says the narrator (Davis is an esteemed translator), will relate more about the farmer and his life in la ville. But first, the reader must learn more words, as in:

What more can you ask from a French lesson, or from a writer so sneaky, and so good?