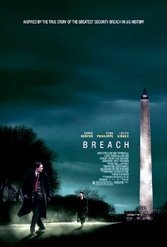 A performance of deep and convincing rigor by Chris Cooper is the tiller of director Billy Ray’s taught biopic about Rober Hanssen, the cunning and devoutly Catholic FBI agent arrested for treason in 2001. Analyst Hanssen spied on behalf of the Soviet Union for more than two decades. Once on to him, the FBI required years to nail him.

Ray’s cinematic chessboard is minimalist: Cooper as the guilt-ridden Hanssen (he calls the United States a “powerfully built but retarded child” in a memo to his handlers), Ryan Philippe as Eric O’Neill, the ambitious young FBI comer assigned to monitor Hanssen as the Bureau’s mole-within-mole, and Laura Linney as lead agent Kate Burroughs, herself once embarrassed by Hanssen and now determined to reverse the tide.

Ray’s “Shattered Glass,” about “New Republic” plagiarist Stephen Glass, was elegant and eloquent in examining the ticking of people, not the luridness of their deeds. The deeds we know; it’s the ticking that fascinates. Ray follows the same formula here, circling in closer with each passing 10 minutes. The cat-and-mouse relationship between Hanssen and O’Neill is complicated by mutual respect. A tense exchange on Key Bridge between Cooper and the brilliantly bluffing Philippe in the second half of the movie is worth the price of admission.

For once, a patriotic movie that is neither boisterous nor condescending. At times, Cooper’s performance at times recalls Gene Hackman’s glory days in Francis Ford Coppola’s “The Coversation.” A maudlin ending is the only complaint.