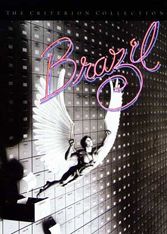 A zany but wildly imaginative satire on conformity and police state bureaucracy, “Brazil” borrows whimsically from Latin American dictatorships, the Industrial Revolution, Thatcher’s England, and twisted feminism to stake its visionary claim. Terry Gilliam’s breathtaking retro-futuristic world — he’s still in Monty Python mode — is Babylon on a Nazi dirigible. Sam Lowry (Jonathan Pryce) turns himself into an archenemy of the state for tracking down a “paperwork” error involving a man named Tuttle. While getting in over his head he falls for trucker Jill Layton (Kim Greist), whose character anticipates the portrayal of women in futuristic fantasies (see Carrie-Ann Moss’s Trinity in “The Matrix.”) Robert De Niro and Bob Hoskins have rip-roaring cameos. The soundtrack is pure comic opera. Don’t try to hard to fathom or deconstruct. Just enjoy the ride. (N.B. — one of the greatest-ever movie posters…)