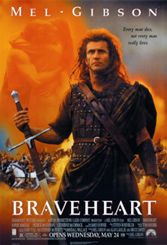 Mel Gibson is just right as William Wallace, the grandstanding commoner who led the medieval Scottish surge against the English. He’s an entertaining conqueror who’ll drink drain-killer to make good on the higher cause. Critics of Gibson’s affection for bloodshed (“The Passion of Christ,” “Apocalypto”) should study the “Braveheart” model. Is Gibson interested in the politics of Scotland’s rise? Yes, up to a point. But more to the point, he’s a cymbal-slamming narrator who uses physical violence to illustrate a pre-enlightened world. It’s an audience-capturing device that eschews any need to excuse itself. Christ or conquerors, Gibson likes them harsh (and hurt). Psychology 101 aside, this is as rousing a film as Mel ever made, above all because he enjoys it so much.