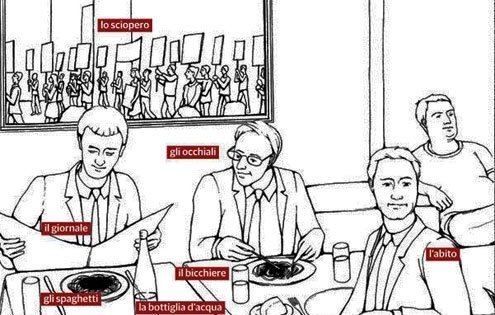 Learning the words may be the easy part. It's stringing them together effortlessly that poses the challenge.
A

s a longtime foreign language student and now an expatriate, I’ve always been strangely and persistently curious about the concept of “fluency.” In middle school, I considered the word fluent as sacred — it conjured up a certain reverence and respect for the speaker, and I regarded the language faculty with a quiet fascination.

Mrs. Foss impressed me the most — she taught Spanish and French and had worked as an au pair in Paris as a teenager. I imagined her gliding past the Eiffel Tower on a red bicycle with a jaunty beret, beloved by the locals. Becoming fluent sounded exotic and romantic, and I longed for the day when I too could describe myself as such: I’m Alexandra, I’m 14, a twin, and bilingual.

I imagined acquiring fluency in a language as a sort of exclusive club, the ultimate destination in my language career. One day, I imagined, speaking my second language would be effortless, and I would blend in with the natives.

There’s a myth, however, to language fluency — some assume, as I did, that it’ll happen by a kind of osmosis, that by simply breathing in Italian air and drinking Italian cappuccino you’ll slowly but surely rise to the linguistic level of a UN interpreter. “I can’t wait to just get there and become fluent,” a friend of mine confidently declared before a three-month study abroad stint in Florence. She studied Italian 201 and struggled her way through homesickness. When she returned, she was tanner, worldlier certainly, but not fluent.

Fluency, I ultimately learned, requires hard work and a willingness to make a fool of yourself repeatedly — or at the very least make mistakes. Acquiring Italian has been nowhere nearly as glamorous as I’d pictured. Hours upon hours of classroom instruction and basic phrases have proved tedious but necessary: Would you rather live in the city or the country? If you were stuck on a desert island, what would you bring and why? If you were an animal, which animal do you think you would be? I reasoned I’d rather live in the city and would most likely be some sort of bird, but had difficulty articulating that I liked the energy of a city and that birds could fly wherever they wanted when the mood struck them.

Linguistic immersion didn’t just mean adapting to stores closing at three in the afternoon or hanging laundry outside in lieu of a clothes dryer, but also interacting (continuously) with native speakers, an anxiety-inducing prospect for a nervous perfectionist. “I’d love to take a nap,” I once said to a classmate at the close of a Geografia 101 class at the University of Bologna. “You just said something vulgar… not a nap,” she said, patting me affectionately on the shoulder. I confused balloons (palloncini) with the word for clowns (pagliacci), announcing to a group of my lunch companions that I was terrified of circus balloons. I didn’t realize the mistake until weeks later, and oddly woke up with a jolt one morning with the realization.

I filled notebooks and notebooks with columns of new words and mulled over them after class, in cafes, on the bus, pleasantly surprised when I’d recognize a word I’d studied in conversation (brandina, cot! criceto, hamster! imposta, shutter!). I went to the movies and in the dark took notes on never before heard idioms and expressions, my notebook looking like a confusing collage of feverish scribbles when the lights went on and the credits rolled.

Eventually, speaking Italian did become easier, and I do consider myself fluent, although my Italian certainly isn’t perfect. When I’m tired or flustered speaking error-less Italian can be a challenge, and when I return from the U.S. after a month long visit, my accent seems to veer frustratingly towards American. “From New York?” the cab driver asked me kindly in English on my way home from the airport. But I’ve realized my problems aren’t unique to me. My college Italian professor visited Rome a few months ago and we spent a lovely weekend catching up. She’s studied the language for decades — her PhD is from Harvard. “God, yesterday I was trying to say scoops of ice cream and instead I said balls. So awkward.”

Ultimately, I suppose becoming fluent is no longer a final destination. The finish line keeps getting pushed back because the journey never ends. I still learn new verbs and expressions, and haven’t shrugged the habit of compiling and poring over them carefully, with a scientific precision. A stack of notebooks sits on my desk. It grows higher every year.