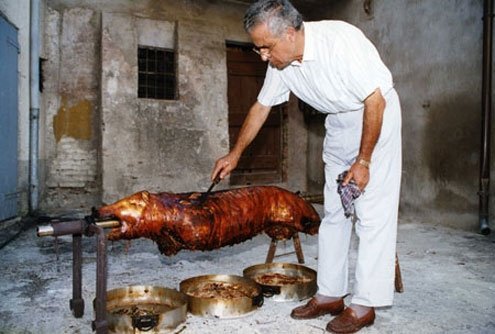 Umbrian porchetta is a delight that should be eaten without interruption.
S

trange things happen in the countryside. For a woman, it can mean a close encounter of the cheeky kind. My own little event came a couple of weeks ago, out of the blue, and probably wouldn’t have happened had my husband not been away on a trip.

On a cold, windy and rainy Saturday night, three of us women — my friend Giulia and my 12-year-old daughter — sat in the farmhouse kitchen atop our lonely mountain. Being alone never bothers us. We’re country girls. Saturday nights in the middle of a long rural winter usually slip by uneventfully.

That night, we were looking forward to a simple dinner of salad and porchetta, the famous fennel-scented pork roast sold by roadside trucks in markets and villages throughout Umbria.

Suddenly the doorbell rang. Though we’re fearless, we decided to have a look first. At the door stood a soaked young couple feebly illuminated by a smartphone screen. As it turns out, they were village folk decked out in their weekend finery. I didn’t bother asking how they’d managed to get lost “on their way to the pizzeria” since our land doesn’t have one. We’re nowhere near any dinner destination. “Signora,” said the young man, “our car is stuck in the mud, could you call a tractor to pull us out?”

Again, I avoided pressing him on just how he’d gotten stuck in my fields, which are 100 meters from the road. The young man insisted he’d tried to turn around but I’ve known the area for 12 years. It made no sense. It seemed more like they’d gotten… distracted.

Still, when things go wrong for people in the countryside, particularly on a wretched night, it’s normal enough to try to help them out. I called one farmer. No luck. A second one agreed to try to tow the car and the couple walked back out to their vehicle. They came back after a while: no one had showed up, the young man told me.

I called the farmer back and he said he was on his way. The young man, now relieved, boldly kissed me on the cheek.

Had he really just said that? Why, I told him, would I let the kiss go to my head? He was half my age and no Brad Pitt. Giulia had to stifle a laugh.

Only in the countryside, I told myself, do young men who don’t look like Brad Pitt get stuck in a muddy field while on date with their girlfriend, interrupting the prospect of a delicious porchetta meal.

That said, if you want the very best porchetta in Umbria (and can avoid driving into a ditch), head for market square in the town of Bastia Umbra, near Assisi. Don’t expect beautiful scenery. Or any scenery. What you’re looking for instead is an ugly parking lot located between Via IV Novembre and Via Vittorio Veneto.

At the intersection of the two roads, near the newspaper kiosk, is the Lunghi porchetta truck. Mr. Lunghi, from nearby Costano —where they’ve been making porchetta for five centuries — opens for business at 5 p.m. The aroma is mesmerizing and people line up for hours. By 7 p.m. Mr. Lunghi has sold a whole pig.

Don’t be late. And don’t get distracted. And don’t even think about kissing Mr. Lunghi.