Boy toys (on the pitch) 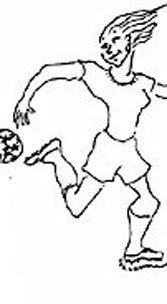 moved to Rome from America determined to find a soccer team. I learned my game on the pick-up fields of Connecticut while playing with a motley crew of locals and mostly male graduate students who were a mix of giant German engineers, hot-tempered local bartenders and swift Korean pharmaceutical scientists.

We played avidly several times a week, until dusk on summer nights. I loved the pursuit, the aggression, and the strong, unspoken camaraderie. Once we proved we could play, we women stood on a par — cordially invited to join the game without exemption from shin-bashing or being bulldozed by Germans.

When I left, I taunted the guys about how unstoppable I’d become, playing in a country of such heightened soccer passion. I dreamt of giant fast-paced pick-up games in local parks, or maybe sneaking onto a university team and battling well-trained women. Anything but what I found.

I spent two months in Rome scouring my neighborhood for games. After a few failed park-hunts and boys-only soccer clubs, I found a coach who promised to try me out for one of two girls’ teams: “Piú brava, o meno brava.”

To prepare for the grand tryout, I dribbled a ball through the park in Piazza Albania, where a dog-walking neighbor offered to kick around. We kicked back and forth until he (who said he hadn’t played soccer for 20 years) started to wheeze and gave up. As we kicked on the grass, tiny dogs broke through trying to steal the ball, only to be chased down and slapped by old ladies barely stronger than their pets. A charming neighborhood event, but a far cry from the soccer intensity I sought.

My Italian coworkers delighted in feeding me essential soccer commands (Guardami!), shouts of confidence (Gioco duro!) and a medley of vulgarities for defense against the ref. Well-rehearsed and cleated, I showed up to the sports center near the Catacombs.

Only when I got there did I realize the terms of the tryout: I was to join the practice with a group of 13-year-old Italian boys. I jumped into line, expecting to be snubbed and scoffed at by a crew of little hotshots. But amazingly, these boys — perhaps because of clumsy growth-spurts and timidity — did the closest thing to accepting a 22-year-old foreign girl on their team: They ignored me. They carried on with the drills, cursing and cheering and running on unfazed.

The girl’s team I was trying out for never materialized, but I got the rare chance to enter these boys’ lives, to become one of them for an hour. I watched and felt the rush of anger that flushed their faces, the eagerness for victory, the shame of summoning the coach’s rage. At last, at the end of the practice, I reached one moment of closeness: I crossed the ball in front of the net and my fire-haired companion flipped it back up in the air and called the first and only words spoken to me. “Con la testa!” he called in encouragement. My header missed the net but the rush of shared triumph, so nearly achieved, struck me — he’d let me into his world.

A second attempt brought me to some kind of Catholic institution near Villa Doria Pamphilj. I walked past nuns and school children to a dirt pitch where I’d been promised girls my age. The director led me to one with a beach top, mascara, and long blond hair that gave her model looks. Sixteen and the daughter of the owner, she welcomed me effusively, chatted a while, then held out her hand and called out, “Vieni!” in pure soprano.

I followed her to a four-foot-wide storage room where her stocky 14-year-old teammates were lining up to change. There were introductions and questions and I swiftly became one of them, submerged by high-speed sound and banter about unstylish clothes. The light was burned out and every so often someone closed the door and the girls screamed in the pitch black.

The ensuing scrimmage puttered on at low-intensity, dissolving at times into laughter or complaints about the heat. The young coach, who I later decided must have been a priest, spoke softly, to brazen teen retorts. We finished and returned the locker room to restore hair and resume chattering.

Neither expedition has brought me any closer to the high-level play I’d dreamed of. Women in Rome, I’ve been informed, swim and play tennis and volleyball. But until I return to the glorious, shin-bashing fields of America, I’ll be grateful to these teens for giving me the chance to join them.

About the Author: Melissa Bailey