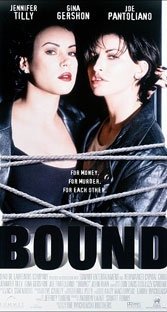 Some directors are defined by a film or film series, and the Wachowski Brothers remain tied at the hip to “The Matrix” franchise and its cult power. But go back a few years and you get “Bound,” their directing debut, which despite its jagged edges stands out as among the most sultry and physically idiosyncratic noirs American cinema has dished out in recent times, on par with the Coen Brothers’ 1984 “Blood Simple.”

Violet (Jennifer Tilly) is a voluptuous moll to high-stakes Chicago money launderer named Caesar (Joe Pantoliano). But she’s smitten as soon as she sets elevator eyes on ex-con and part-time janitor Corky (Gina Gershon). As the Italo-crooks go about their crookedness, Vi and Corky entangle limbs and minds — and hatch a lover’s plan to steal $2 million. All they need to do is dupe Caeser, which seems easy enough. But it’s not. Caesar hones in on the con, or part of it, after which the brothers zero in on the consequences.

All the tricky physics they later apply in Matrix-land — action that flings open like a mousetrap in slow motion — they honed here. The cat-and-mouse game between dumb brunette Violet and wildly wide-eyed Caesar is a hyperbaric chamber. The brothers flavor early scenes with vaginal kitsch — pipes screwed, water leaking — and later ones with all manner of additional moisture: paint, ice cubes, and blood-soaked money, giving everything a distinctly menstrual ooze.

Tilly, her near-falsetto in full bloom, is mesmerizing as a shrewd pro in love — both with Corky and money. Gershon, though an unconvincing lesbian, is workmanlike adornment. But in the end it’s the crazed Pantoliano who steals the show, trapped between his mob enforcer family and a lesbian love affair, the two kinds of hardcore the brothers put into a dead-end corner. Mental violence has physical consequences, which the Ws understand, at the same time hemming the ample gunplay and blood spatters into a surreal space. In fact, it’s the story’s claustrophobic confines — a few apartment rooms — that put the high beams on sex, greed and the grotesque. Though the Tilly-Gershon love scenes, vaguely risqué at the time, attracted considerable attention, this is a clever and enthralling little thriller filtered through Hammett-Chandler school of sin city American crime.