Bottom of the 33rd 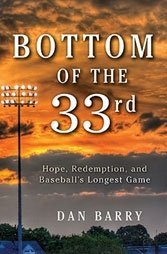 Ostensibly the story of the longest baseball game ever played, a 33-inning, three-day minor league contest between two marginal teams, one from a broken textile town in Rhode Island, the other from a struggling city in upstate New York, New York Times journalist Dan Barry’s book stands out more as an anecdotal ode to American perseverance. It is “informed imagination” bolstered by “baseball ephemera and personal scraps.”

First the facts. On April 18, 1981, a cold and windy night before Easter Sunday, the home team Pawtucket Red Sox (with future Hall of Famer Wade Boggs) played the visiting Rochester Red Wings (with future Hall of Famer Cal Ripkin, Jr.), a mundane match-up embarked on in small and rickety McCoy Stadium (“… basically a landfill under lights.”) By tradition baseball is played until someone wins, with a caveat: Most leagues don’t allow an inning to start after an agreed-upon hour, 12:50 a.m. by International League rules. But in 1981 gremlins saw to it that the umpire instruction manual, the Bible of in-game decision-making, made no mention of a curfew. This fantastically quirky detail informs and sustains Barry’s fate-laden, full moon saga. The first 32 innings of the game lasted more than eight hours, until past 4 a.m.

Once Barry gets past a heavy-handed prologue that unwisely attempts to wed the game to Easter myth and hymn-like pureness of purpose (seats become pews, spectators congregants), the story dives into the nitty-gritty of the “twilight-zone” game itself, shifting adroitly between the passing of innings and the stories of future stars and washed out dreams (“A few dozen hopefuls in a poorly lit coliseum…”) He tells of Red Sox owner George Bernard “Ben” Mondor’s steadfast refusal to let Bud beer into his stadium to redress a slight; of Dutch pitcher Win Remmmerswaal nearly coming to blows with a teammate as a result of “an intellectual argument about the properties of electricity”; of infielder Bobby Bonner, whose one major league error doomed his career, and the uniquely named Drungo Hazewood, who tumbled from baseball to construction work; of Dave Koza, who ultimately won the game but lost both his major league hopes and his marriage.

Barry transforms a small event — an absurdly long baseball game — into an “American opera,” a bittersweet portrait of the rat patrol backwater of a much-idealized sport.