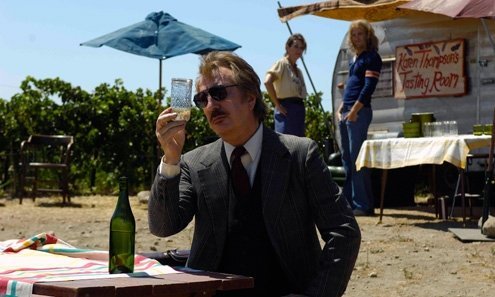 ine again assumed the role of leading character on the big screen with the summer release of Director Randall Miller’s “Bottle Shock,” one of two films out this year that bring the story of the now infamous, blind Paris wine-tasting of 1976, known as “The Judgment of Paris,” to general audiences.

The world famous competition occurred early in California’s wine making history, though even the most casual of today’s wine drinkers are likely to know about the state’s reputation as one of the world’s most successful wine regions. Three-quarters the size of modern day France, California’s triumph in 1976 served as the impetus it needed to catapult the state’s from its relaxed slumber into the financially flourishing sensation it has become today. Today with a crushing (wine pun) 85 percent of the United States’ total wine production, California has had the most success with its cabernet and Bordeaux-style blends.

But 1976 was another time. Important wine producers like Robert Modavi, Heitz Wine Cellars and David Bruce Winery were just gaining momentum and Napa Valley had yet to hit her stride. And despite some fine local wines, the most talked about bottles being traded still hailed from the old world.

But this article is not about Hollywood’s take on wine or how such movies can create a surge in sales in the wines they showcase. Like 2004’s release of “Sideways,” which increased the sales of Pinot Noir by 16 percent, this movie is bound to have some impact on Chateau Montelena’s Chardonnay and Cabernet Sauvignon. But for me the most interesting part of the movie its title, which is a play on words reflecting Paris’ disbelief over the California wine success story.

Yet bottle shock itself is a very real phenomenon, brought on by bottling when several factors conspire to affect a wine’s taste. Filtration, aeration, portioning and vibration — each one has the potential to thrash a wine’s equilibrium.

Before bottling, wine is quietly stored in tanks and barrels where each sedentary container serves as its own microcolony of elements and flavors. During the bottling process the wine passes through hoses and equipment and can be pushed through membranes designed to filter the wine of suspended matter before being divided into smaller bottle sized quantities suitable for consumers.

This sudden movement during processing disrupts the wine’s harmony and if you take a sip right away, you may taste only the fruit, heavy-handed wood or too much alcohol. Luckily, the flavor is only affected in the short term, and imbalance usually rights itself once the wine has had time to readjust.

Think of it as a process similar to the birth of a baby. The little tyke has been hanging out in its mother’s womb all comfy-cozy for nine months only to suddenly be squeezed and pushed through small and confining spaces. Like a squalling angry newborn, the freshly bottled wine may be a bit traumatized and misshapen. But like resilient infants, newly bottled wines recover with time, eventually finding their own legs, often with as little as three months of bottle aging.

Another version of bottle shock is called “Travel Shock” and is brought on by the temperature changes and vibration that occur during shipping.

Wines have almost 300 organic compounds, two-thirds of which add flavor and give wine its characteristic depth and complexity. During bottling and later during transportation, these elements crash and bump and splash into each other, sloshing about much like that hot dog and cotton candy do inside your stomach during a Tilt-A-Whirl ride at the county fair.

When you get off the ride, your equilibrium isn’t quite what it should be and your head and stomach still feel like they’re spinning. Wines feel much the same way.

So now that you know what bottle shock is, how long does it take for a wine to reconcile itself with its new surroundings? Wine merchant’s recommend allowing recently shipped bottles to rest for two weeks after long distance transport, sometimes upwards of four-to-six weeks for particular varietals. In this time the wine’s true colors and outstanding pedigree will be revealed.

Shocked? Surely, but like all good things, definitely worth waiting for.

Chateau Montelena 2005 Chardonnay, Napa Valley This is among the few California chardonnays that I like to recommend because it isn’t over-oaked. Using 10-20 percent new oak, the wine hits the pallet cleanly with crisp green apple and intense lemon pineapple taste. Well-balanced acidity gives this wine a surprising intensity and richness without being heavy handed. If you have it shipped don’t forget to let it rest for a month, allowing it to soften and harmonize.