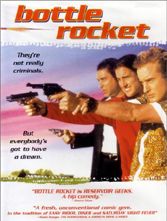 Low-budget all the way, this is one of those bits of American lore that gets to the misguidedly decent side of a big and often angry country. Owen and Luke Wilson put it together, with their friend Wes Anderson directing.

Anthony Adams (Luke) gets out of a Texas mental hospital and teams with his friend Dignan (Owen) to plan a ludicrous heist. The comedy crooks want to go big-time and meet a real gangster (a winning James Caan). The plan goes nowhere because Anthony falls in love with a motel maid named Inez.

Anthony and Dignan are terminally inept but incurably caring. Debut movies, like first novels, define sensibility. For insight into Anderson’s later “Rushmore” and “The Royal Tenenbaums,” this is a must.