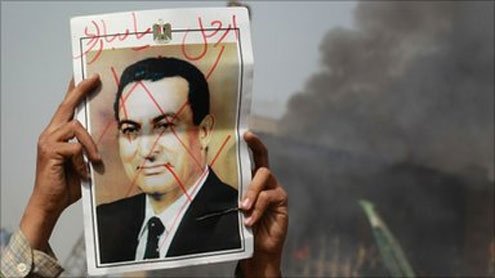 oday’s North Africa bears a striking resemblance to obsolete South America, where for most of the 20th century the military and its baton-wielding progeny managed jailhouse states defined by faux-presidents and gilded feudalism.

The pattern came undone in the post-Communist world when dictatorial outposts like Chile, Argentina, Paraguay tumbled into chaotic democracy that now defines them. As the century wound down, totalitarian rule lost expediency’s approval, and history’s.

That same de-synchronization is now occurring on the African side of the southern Mediterranean, mostly because, as in South America, rule by drum roll, in open defiance of popular need, has worn out its welcome.

Most of the Middle East’s hot spots, and North Africa’s autocratic strongholds — Tunisia, Algeria, Egypt and Libya — have lived under military chokeholds since the end of World War II. Moroccan royalty has been only slightly less harsh, with Syria’s secular ferocity making up for the Moroccan shortfall (never mind Iraq and Iran, graft-laden police states in both their secular and religious guises).

The leadership of many of these nations remained stuck in Cold War mechanisms by which domestic legitimacy was established and maintained through ties forged with regional and international powers, the citizenry secondary to the whims of global importance. Egypt flirted first with the Soviet Union before pledging to the United States. Libya played terrorist go-between before its one-man personality cult turned greedily toward the mainstream. Aid to these countries came in exchange for promises to leave Israel alone. Or more recently to stop openly funding terrorism.

Western disdain for authoritarianism was put on hold, since local security forces kept surging radicalism in check. This way North Africa autocrats mirrored South American generals, whose corruptly brutish management of domestic populations was papered over by their anti-communism.

Now, the economic and political insurrection that represented 1989 is settling into parts of the Arab Middle East. Estranged from the riches of Saudi Arabia and its Gulf State minions, North African populations are stalled. Cairo is not Dubai.

Military leadership, which has long substituted old-school nationalism and Israel-hating for South American anti-communism, now finds those causes bankrupt. The choices that glitter at the core of the worldwide Web and emotion-welding technology have helped bring restlessness to a boil. Rigid national security as the price of secularism is no longer acceptable. Not when living and working conditions have improved little if at all in 40 years.

But while South America extricated itself from its dictatorial period almost without bloodshed — as economies collapsed, so did real and toy soldiers — it won’t be so easy in the Arab world, where police state nationalism is a trophy wife whose assets have been publicly trumpeted for decades.

Cairo never put aside the military parade culture of 20th century yesteryear. Perhaps more than any state in the region, and not entirely differently from Russia, it dusted off and accentuated memories of military grandeur to keep alive a state-coded caste system. In differing measures and at different times, Egypt has stood for Nasser, the repulsing of colonial fiends, the haphazard glory of the Suez War against Britain and France, the audaciousness of the 1967 and 1973 attacks on Israel, the cheek of Anwar Sadat’s peace initiatives, and the risks posed by Islamic dissent, together creating a “superpower” pastiche in miniature.

The army existed to guarantee the nation, or so the people were told. The downside of the guarantee was a rich-poor divide that limited the creation of a thriving middle class. As in old South America, present-day North Africa all but conceded personal poverty if national pride remained intact.

But that hymn has grown creaky. Strength per se has stopped impressing those it was most intended to humble. The nationalism that nourished Mubarak in 1978 means little in 2011, and the current wave of street protest, even though lacking in focus, is cathartic in itself. People feel involved; rage delivers partial fulfillment. The surge is as old as wind.

Sixty years after Nasser’s illusions of grandeur and 20 years after the fall of the Berlin Wall, the region’s tank-dependent secular autocracies are losing their raison d’être, most probably for good. People want to live better, or at the very least be given access to the vivid and digitalized doorways of real and imagined affluence.

The aging and out-of-touch Mubarak has come to look like little more than an Argentine general in a business suit. Sensing things slipping away, he demands order and reshuffles an old deck, counting on the military to back him up. They may well do so, at least temporarily, but the cheap house of cards on which Egypt rests has already collapsed.