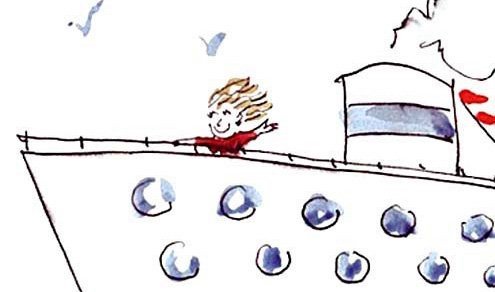 Traveling was in my genes.
F

ear is a terrible travel companion. Fear books you a far too expensive hotel room where you remain, eating predictable room service food, watching TV in a language you don’t understand and wishing you were back home where you belong. My oldest friend from Texas once said that if she could get me past Palo Alto, she would consider her life a success. I feared leaving my beloved backyard (at that time in Berkeley). I did not understand how a 300-ton airplane left the ground, and I was convinced that travel would be, literally, my death.

When I finally headed for Los Angeles in a nice, safe car, I filled the glove compartment with Macadamia nuts, just in case the world really was flat and there were no supermarkets past Oakland.

I then took the next step. I booked tickets on the liner Ile de France which, through a quirk of young luck, were in first class at tourist class prices, and sailed for Calais in Twiggy boots, a headband and no thought for tomorrow. There was money to make the trip, at least then, and my fortune also consisted in possessing a naiveté that helped open many doors along the way.

Still, I was still burdened at every turn by fear. Flying would come, yes, but later.

Fear of travel is more common than you think. The woman fidgeting with her drink (she really wanted a Martini with an olive, not Martini Dry vermouth on the rocks) at the outdoor café is scared to death to ask for change. The man insisting loudly that his bill is incorrect is too anxious to comprehend that there is a pane e coperto, a charge for bread and service, and finally he tips too much out of insecurity. The family unaware of the presence of Caravaggio’s Bacchus because they are arguing over the cleanliness of available restaurants is guided by fear. Fear burns precious energy — the kind more important than traveler’s checks. Fear depletes your emotions until you can’t enjoy the magic of an exciting new place, your senses all aquiver.

Among the best ways I know to conquer fear of travel is to travel, and then travel more. Anywhere. Anytime.

Another solution is to acquire two Italian stepchildren who live in Rome with their mother — and who insist on seeing their father and stepmother, me, as often as possible. You think traveling alone, braving planes and trains, is intimidating? Try setting off on a month’s sojourn in a miniscule car with two small children in tow (one of whom leans over the front seat and leaves teeth marks in your left shoulder). Try arriving at seaside Ansedonia where there’s a sewer leak in the children’s room of the house, giving the two small darlings leave to wail “Puzza, puzza!” Then, of course, there’s the matter of the kitchen: it has a hotplate and no spaghetti strainer.

My minimal Italian from 1964 was whipped into shape by getting to know the stepchildren. During lovely golden days on the beach, at lunches of tomatoes and fresh mozzarella, and on adventures in the Tuscan countryside, we chattered in English and Italian and fumbled toward a long relationship.

We thumbed our noses at the formal spa of Saturnia and opted instead for the outdoor springs that tumbled, warm and sulphuric, over smooth brown boulders. As we changed behind hand-held towel “curtains,” we watched as Italian families spread their delectable picnics on the grass, and everyone from great-grandmothers to tiny babies splashed in the silky waters. Most travelers headed for the formal hotel nearby and missed the delight of soaking outdoors with the soothing sounds of the springs as relaxing music.

I could have stayed home.

I could have avoided all this.

I could have insisted on having my husband’s children visit America where I was safe and sound on my own turf.

But fortunately I ventured out. Curiosity, I learned, was part of my makeup. To have missed the hidden Etruscan ruins; the hot sulfur springs at Saturnia; the picnics of ripe tomatoes, pane casareccio and new wine, and my stepchildren’s delight at country fair pig races, risque circuses (all the acrobats in tiny G-strings) and guinea-pig roulette (the pig runs around a spinning table and then hides in a numbered hole) at carnival-time, is now unimaginable.

And with each passing summer, a piece of the trepidation I originally felt at traveling was chipped away at, until it fell away entirely. The children had opened new doors.

But the fear has also hit at other times, and caused considerable embarassment. On a honeymoon to Paris, for example, I dined at Le Petit Bedon, one of the city’s great old restaurants — known for its illustrious black Perigord truffle en feuilleté. Upon opening my perfect pastry and discovering the black, crusty thing that lay within, I exclaimed, mildly shocked, at its burned appearance and raunchy smell. I called the waiter to please explain.

Ah, the ignorance of youth.

The chef appeared from the kitchen and with great reserve and patience, gave me a tactful lecture on le truffle noir, and showed me exactly how to eat it, what to look for in the taste, and how not to commit such a gaffe again.

Learning to overcome fear — and learning to try to fit in — does not have to be as painful as my tales of woe. I have, in my youth, sat in a cafe in Rome, feeling very American and out of place, in the wrong clothes, speaking poor Italian, and thinking I was being scorned by haughty waiters. And it was all in my mind.

No one was paying attention. The waiters were simply busy. No one cared. I was in Rome. Had I relaxed for a minute, smiled, attempted light banter with the waiter, even in broken Italian, I might have replaced fear with a new acquaintance and perhaps even livened the day with a brief flirtation.

A smile, as maudlin as it sounds, is a great way to banish your own fears and calm those that lurk in others. Looking at people in the eye also works. And I mean really looking — relishing the beauty of faces and recognizing that what travelers tend to love most about their adventure is watching others.

The next time you travel with concern and trepidation, think of this: the only way to go anywhere is to look as if you own the place.

Because, in fact, you do.